I can’t believe I’m already a week into my #miasmerryhexmas makeup journey! Since I decided to do these intense periods of posting back in October, I felt like I haven’t had much time to really reflect on what I’ve created – hence this blog post!
If you weren’t aware, I’ve decided to ditch traditional advent calendars in favour of a digital one, with 25 beauty looks I’m posting on my Twitter and Instagram accounts every day until Christmas!  I want to create one of these posts each week with a rundown on the previous seven days, and delve a bit deeper into my inspiration behind some of the looks!

Day One: Simple Fairy Lights
It was so hard to decide which of my makeup looks to post first, and of course I’m going to have my favourites, so I thought I would ease into the advent calendar with this wee beauty. I’ve never done such a close up shot, so I was super nervous to show my horribly-unplucked eyebrow, but I’m so glad the look went down well (especially on Twitter). I used a nude base (Kat Von D’s Light and Shade palette) before adding in a line over my crease to form the string of fairy lights. Thank God for Lime Crime’s Velvetines that enable me to create these magical wee lights! 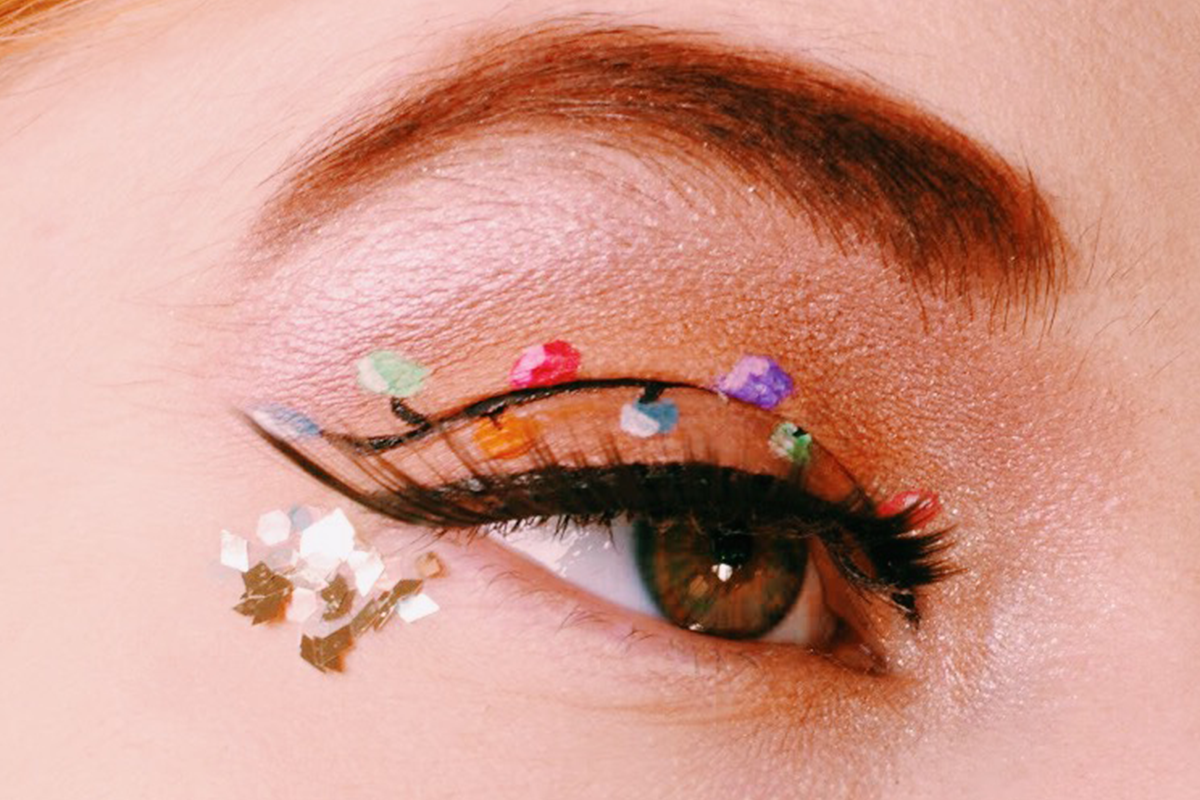 Day Two: Eggnog
Although I wanted to keep some looks traditional, I really didn’t want to be predictable – hence eggnog on day two. I’m mad on this colour, so creating something based on the drink was super fun. While MUA supplied the pigmented eyeshadow, I also drew on cuter elements with black and white freckles, plenty of blush and a dash of gold for a touch of luxury. 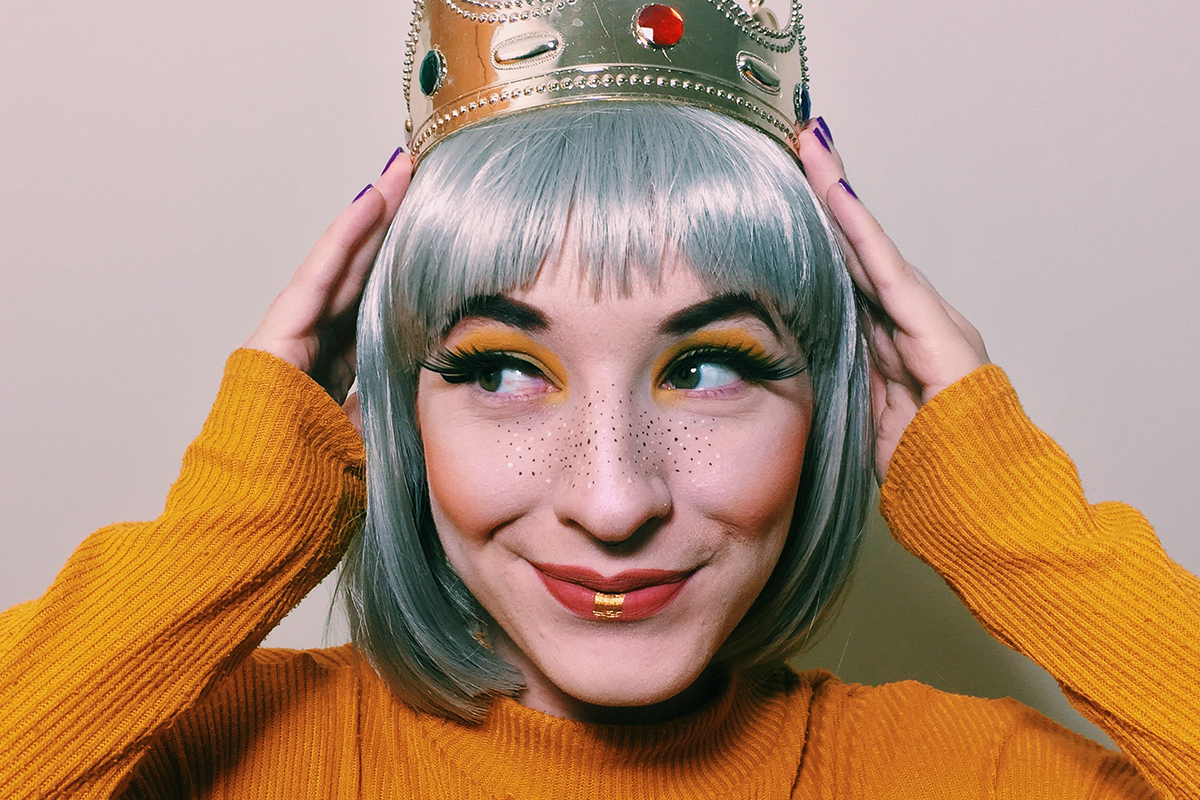 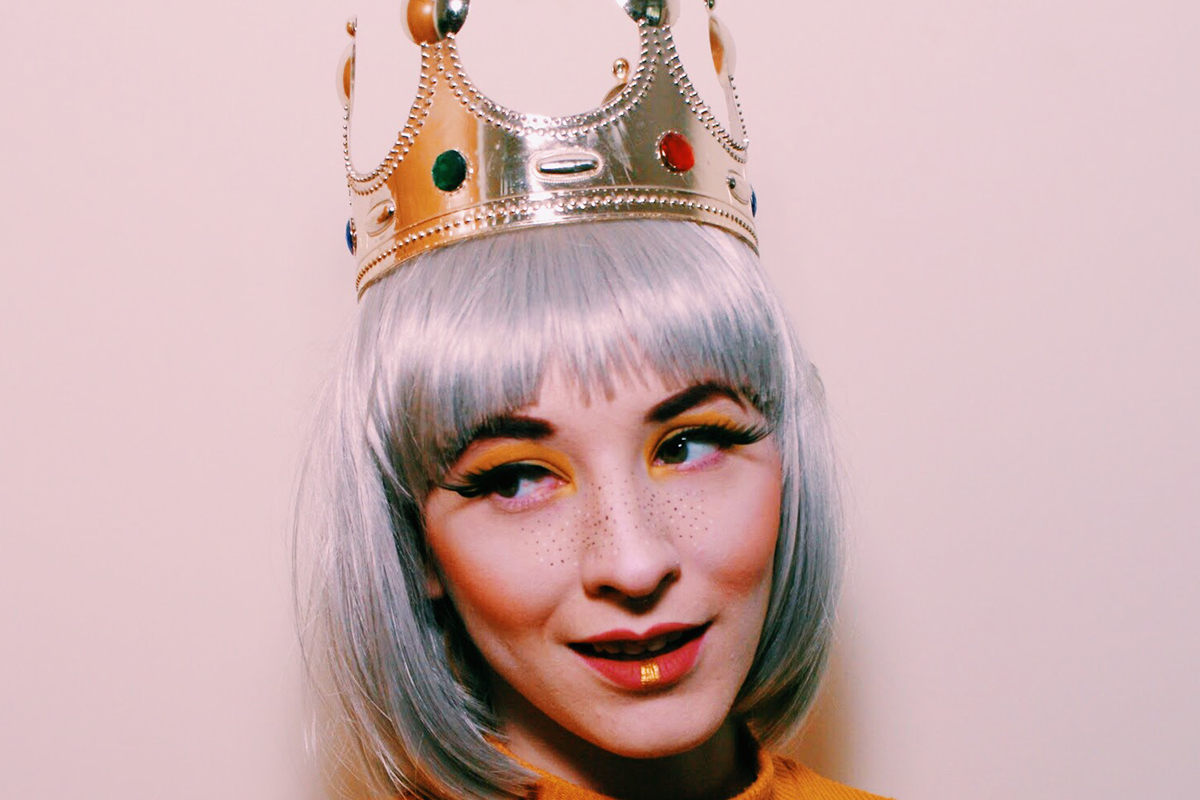 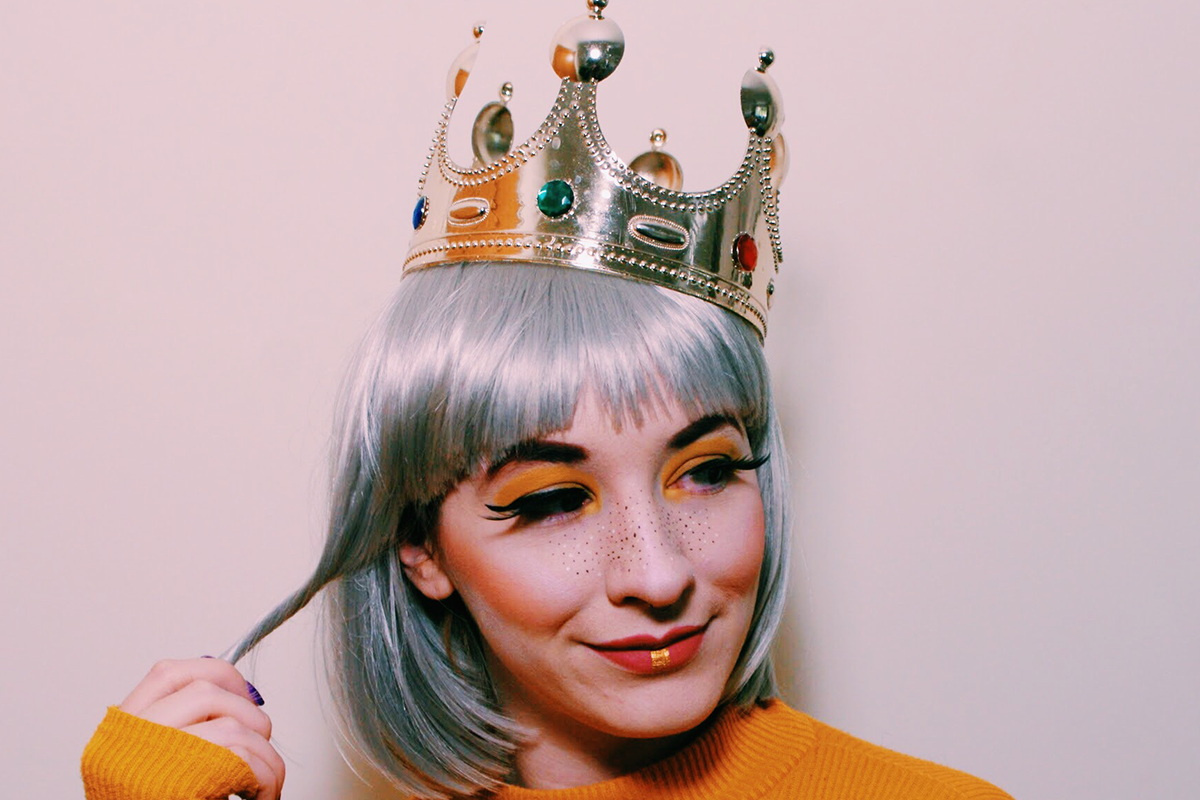 Day Three: Frau Perchta
Before I’d even decided on an advent calendar, I knew I wanted to create some makeup looks that depicted a darker side to Christmas – the Halloween in me lives on! The perfect option came when I started researching European folklore – there are some amazing stories out there and over the course of this month I’ll be sharing quite a few, starting with Frau Perchta. Well known as the female equivalent of Krampus, this witch/goddess/ all-round terroriser, her origins lie in the alpine areas of Germany and Austria. 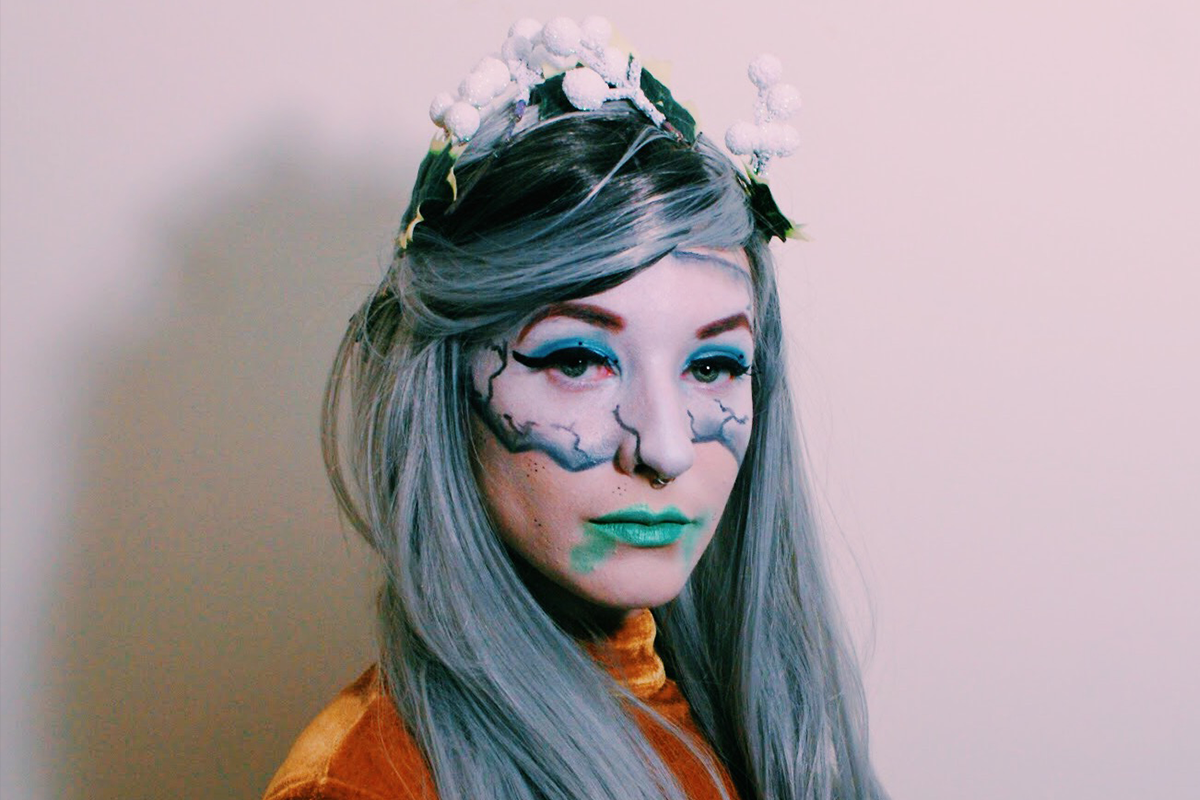 There are several interpretations of her, but I loved her assimilation with Germanic goddess Holda (goddess of agriculture and crafts). Perchta is synonymous with spinning, and shares the role of ‘guardian of the beasts’ with Holda on the 12 days leading up to Christmas. When I was looking for ideas of her form, I found online that it says she takes two forms, either beautiful and white, or old and haggard – hence my idea for the cracked face. 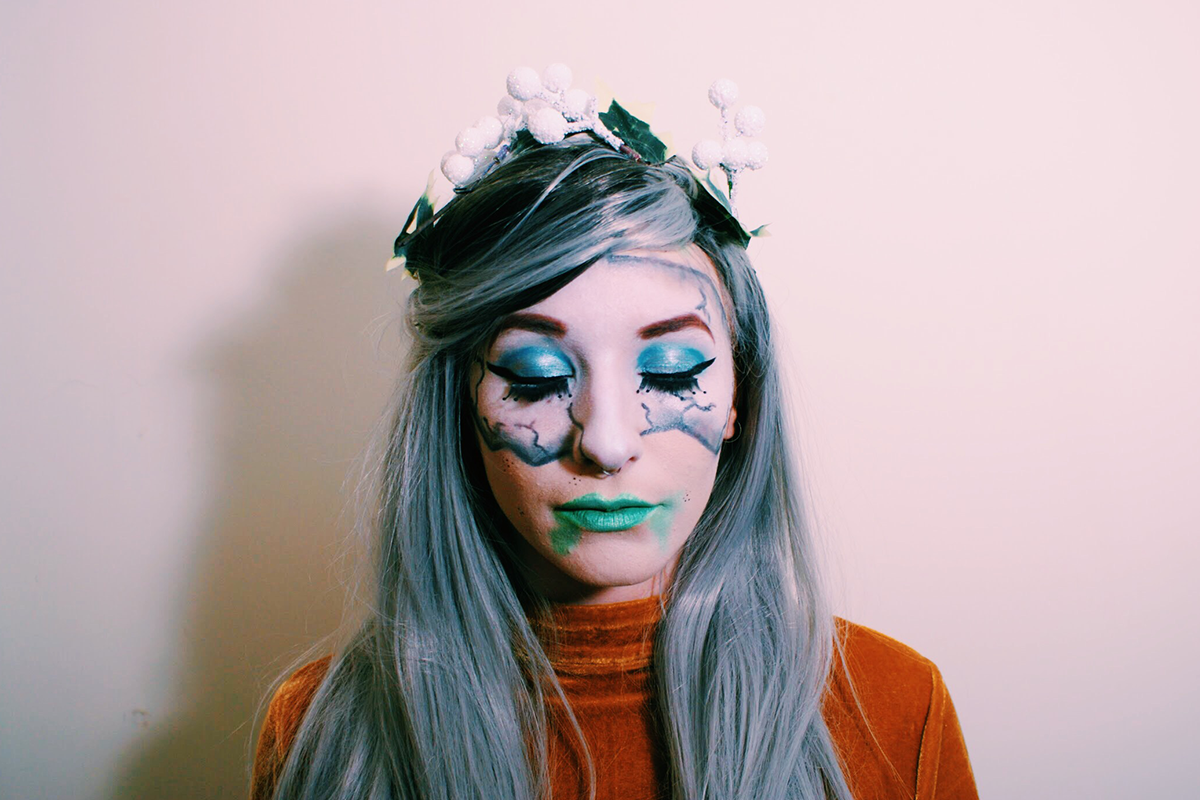 I wanted to make the look pretty and mysterious, but also imperfect so I wanted to seem like her pristine porcelain face was cracking slowly. I wasn’t as proud of this one as I am with the others, I was working with some oil-based face paints that I found were a little difficult to pigment, and came out VERY shiny! Shout out to Hobby Craft for the cute berry/holly decoration I was able to pin in my hair – I love it!

Day Four: All the Baubles
You can’t have Christmas without an abundance of baubles, but I really wanted to add a new twist on the classic Christmas tree accessory when it came to this look. 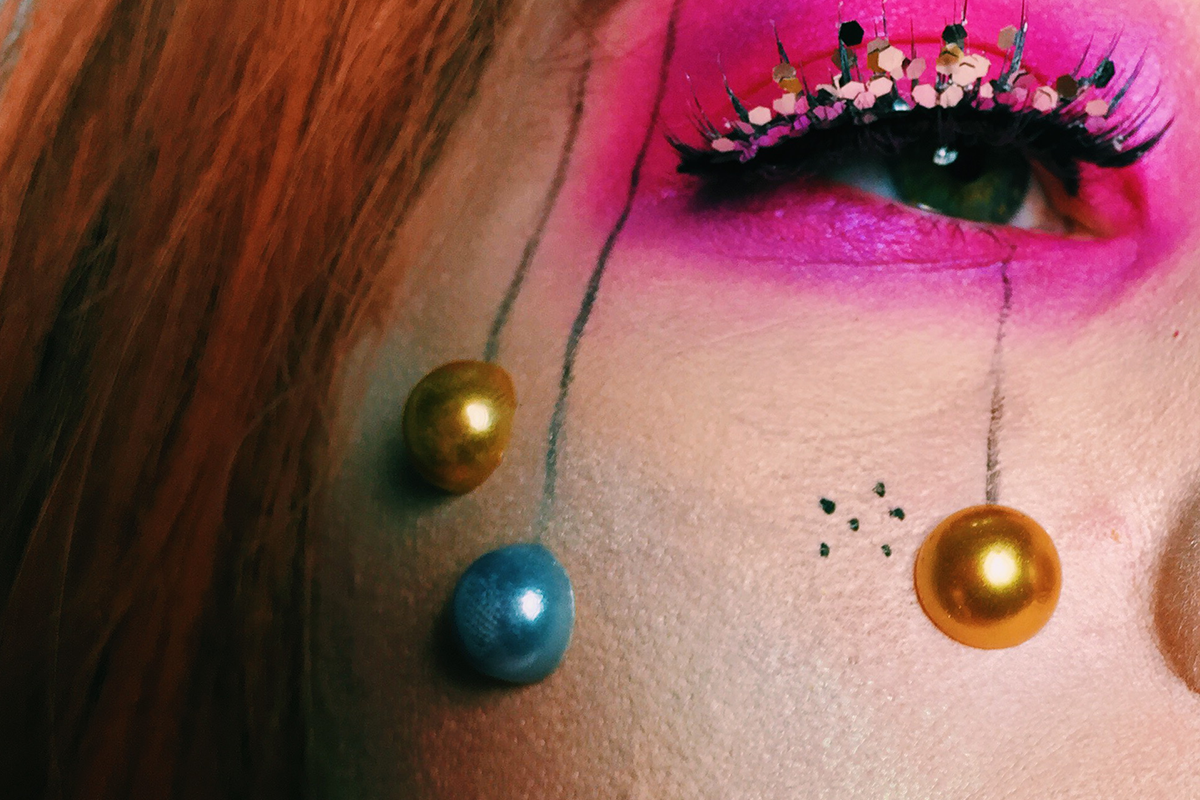 I wanted a really pigmented colour, so chose MUA’s hot pink from their Tropical Oceana palette, before drawing a faint line where the baubles would sit with my KVD Tattoo Liner pen. I used some pearl stickers of varying sizes to create the look, and topped it off with Kat Von D’s Glimmer Veil lipstick in Satellite for extra sparkle – I love this one. 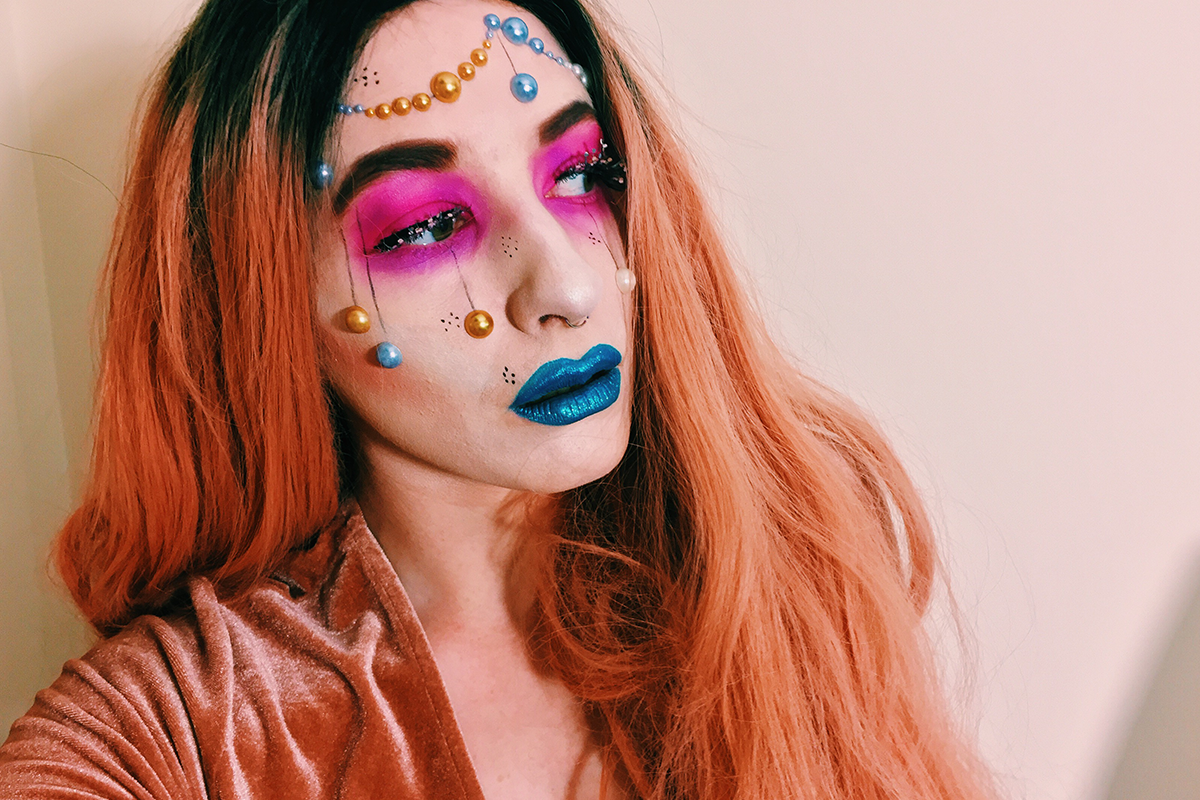 Day Five: Oh Deer
Let’s face it, reindeer have been done to death. After an initial search on Pinterest, I couldn’t find one look that was inspiring me, so I kind just made this one up! I’m still getting to grips with the brow-covering process, so instead drew some brows above my natural ones, and covered them in gems for a little twist. I added heavy blush to a lot of my face, and pulled the look together Jeffree Star’s Masochist liquid lipstick. I made the headband (horns) using a dyed plant I found in the flower section of the supermarket, and draped my hair in tiny bells from Hobby Craft. 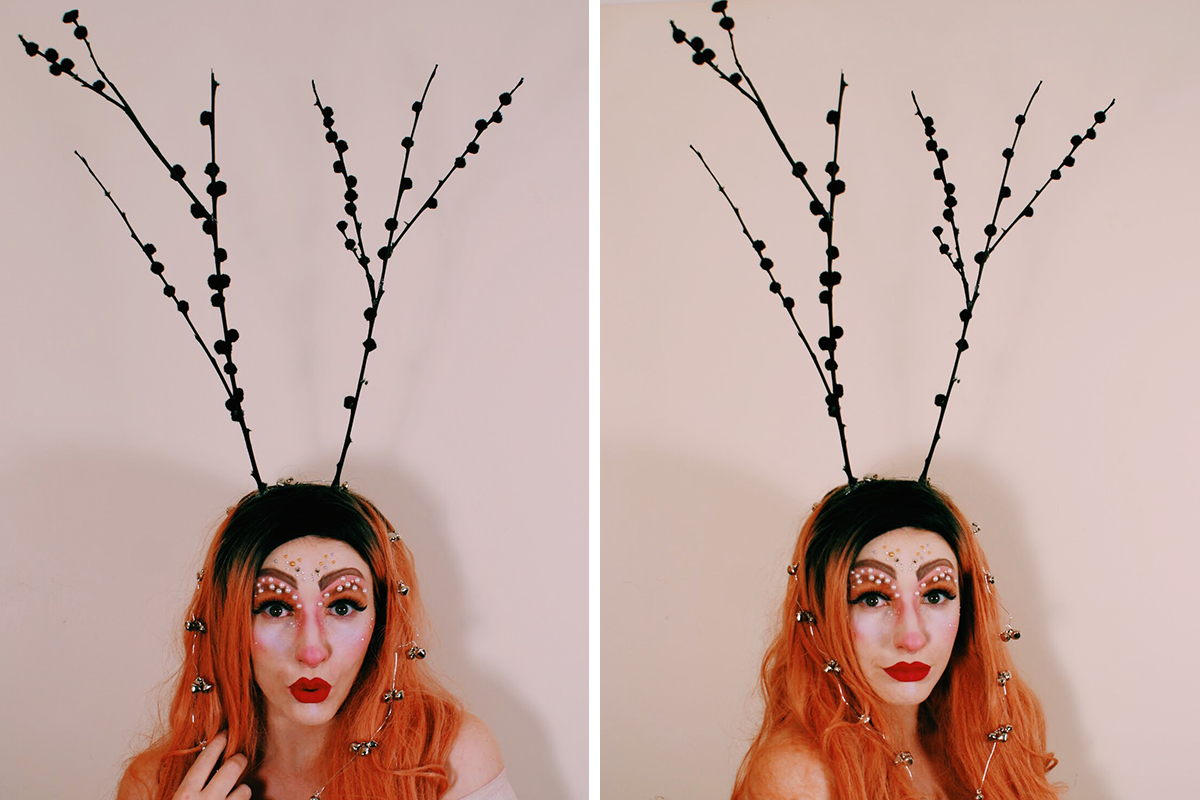 Day Six: Yule Lad
Another slice of folklore for ya! This time, it’s Icelandic creatures the Yule Lads, who’re all about wreaking havoc come-Christmas time. As the story goes, children are meant to leave a shoe by their bedroom window for the 13 days leading up to Christmas – there are 13 Yule Lads and each one have their own idiosyncrasies, so very different characters. If a child has been good, they’ll be rewarded with sweets, if they’re bad, they’ll get rotting potatoes. 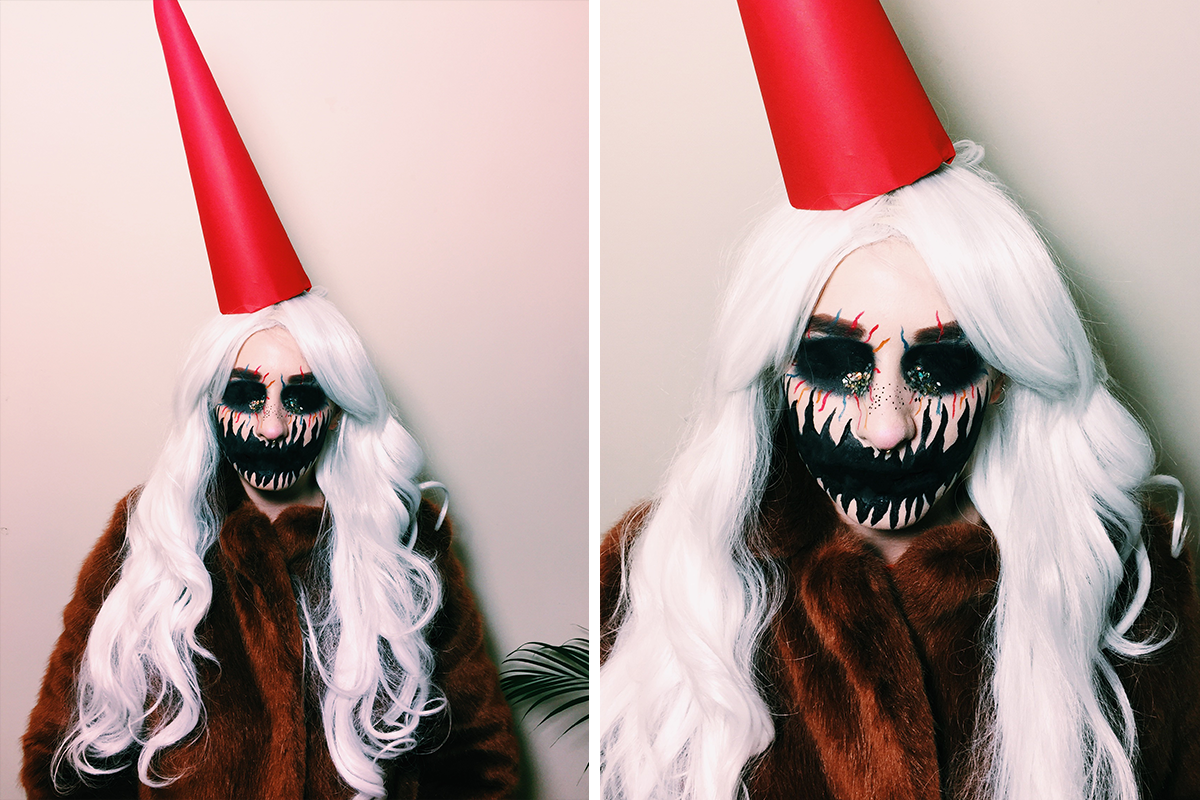 This might all seem a little PG, so I wanted to really get creepy with a depiction of a hollow and twisted gnome-like creature. An abyss-like mouth and eyes made way for splashes of colour and a sprinkling of glitter. 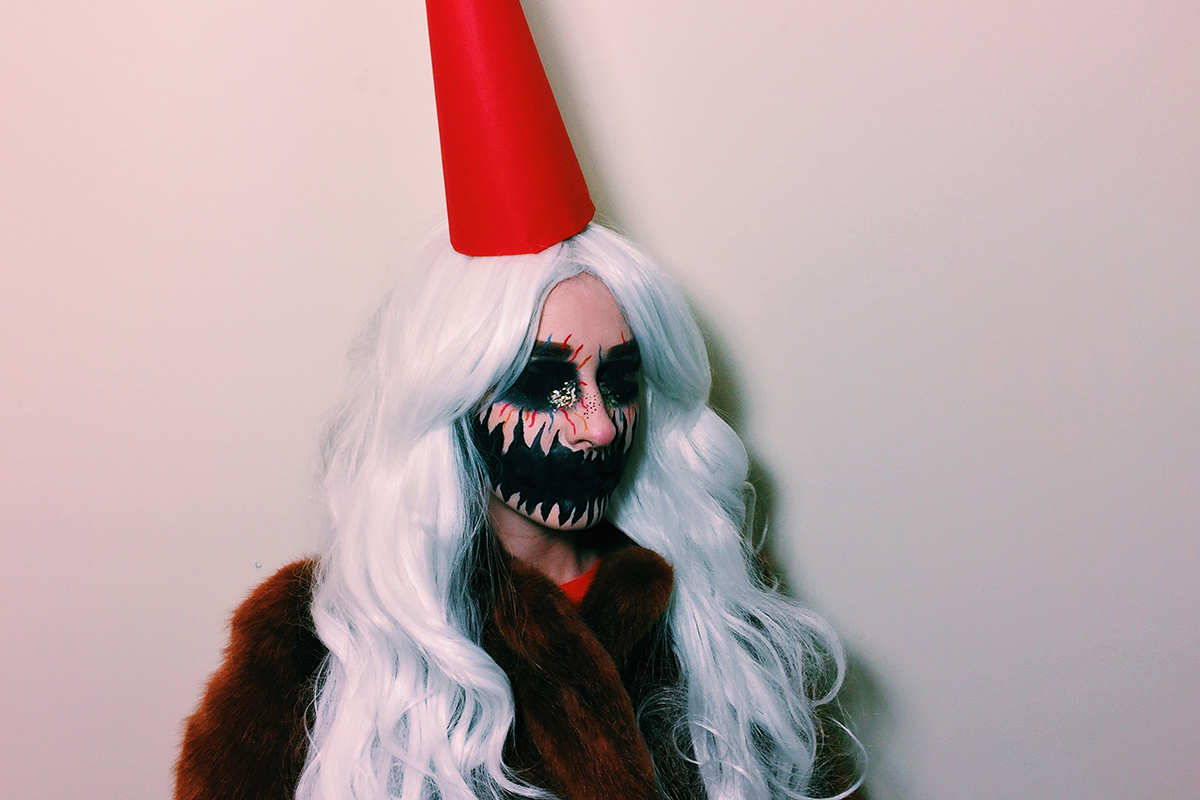 Day Seven: Grunge Mrs Claus
Santa Claus and his wife are time-honoured characters in association with Christmas, so trying to reimagine them was so much fun. Drawing inspiration from the wonderful Kalyna, I came up with a tattooed and pierced Mrs Claus and I LOVE HER! She doesn’t take any shit from the Mr, and she expresses herself through her body art – what’s not to love?! I drew all her wee tattoos using Kat Von D’s tattoo liner (obvs) and gave the look a splash of colour with KVD’s everlasting lipstick in Outlaw. Glitter customised lashes added some sparkle, and I couldn’t finish the look without a gold tooth- Created using Lime Crime’s Xenon velvetine. 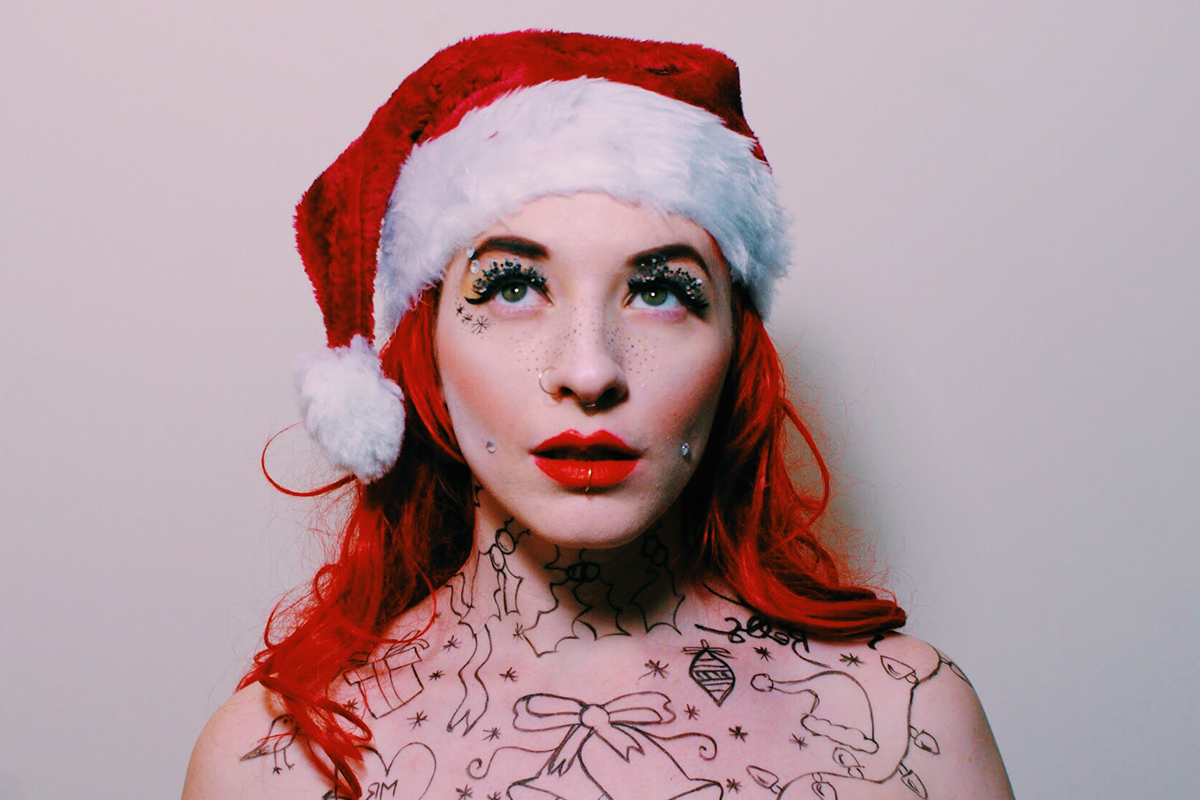 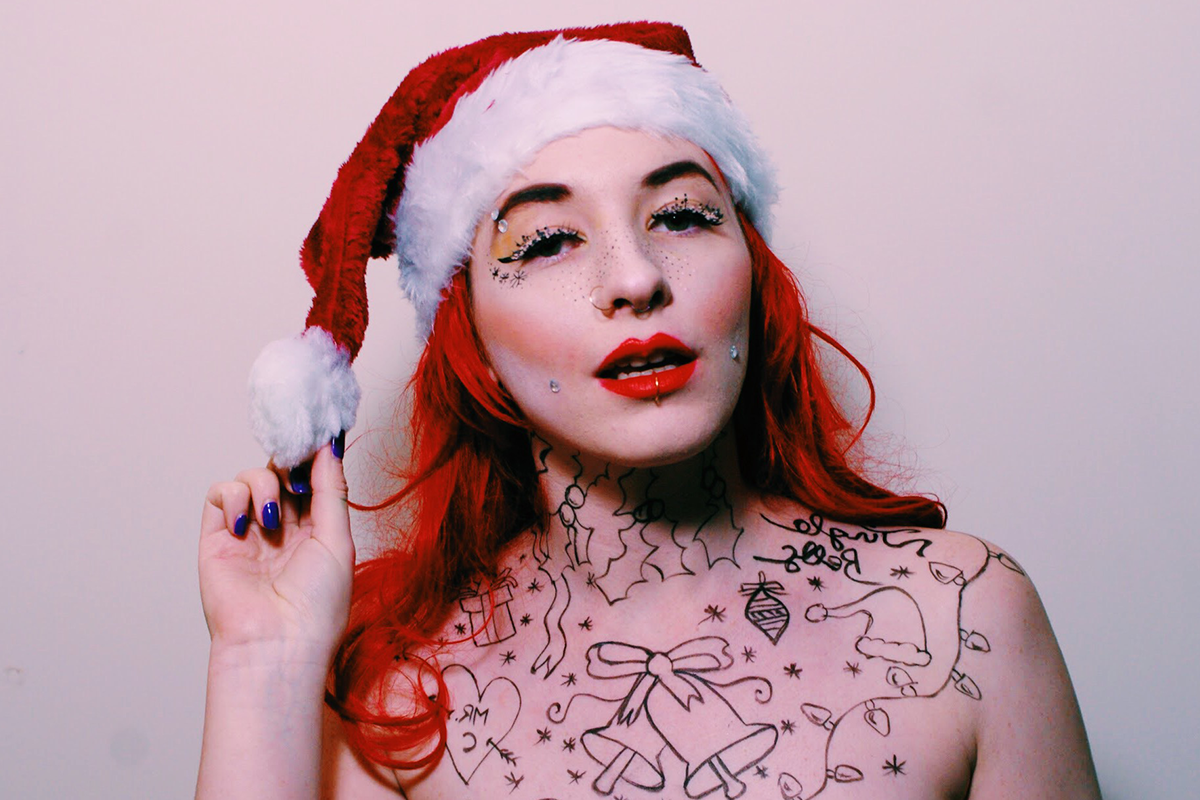 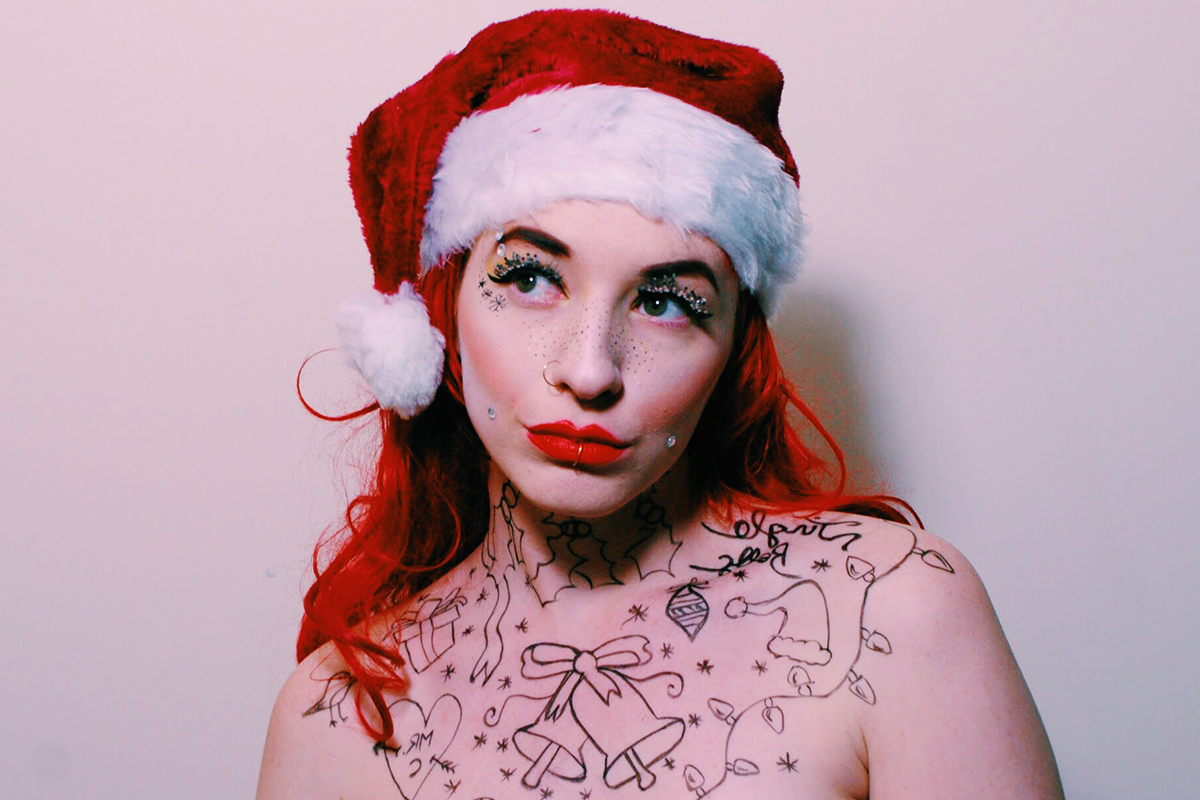 Which look has been your favourite this week and why? Look out for all my posts on my Instagram and Twitter, and to see other looks I’ve created, check out my Beauty Looks page.