If you know me and you’ve read my blog before, then you’ll know I’m a massive plant lover! I’ve recently been talking a lot about terrariums, and I really wanted to find a way to create a flora-themed ornament for Halloween- and there lies the birth of the cemetarium. Also named a cemetery terrarium, these little plant-filled containers are like your own miniature graveyards you can customise to your own tastes and I’ve got to say, I’m OBSESSED GUYS. I’ve already made three, but today I’m just going to show you the most simple and my favourite one of the bunch. 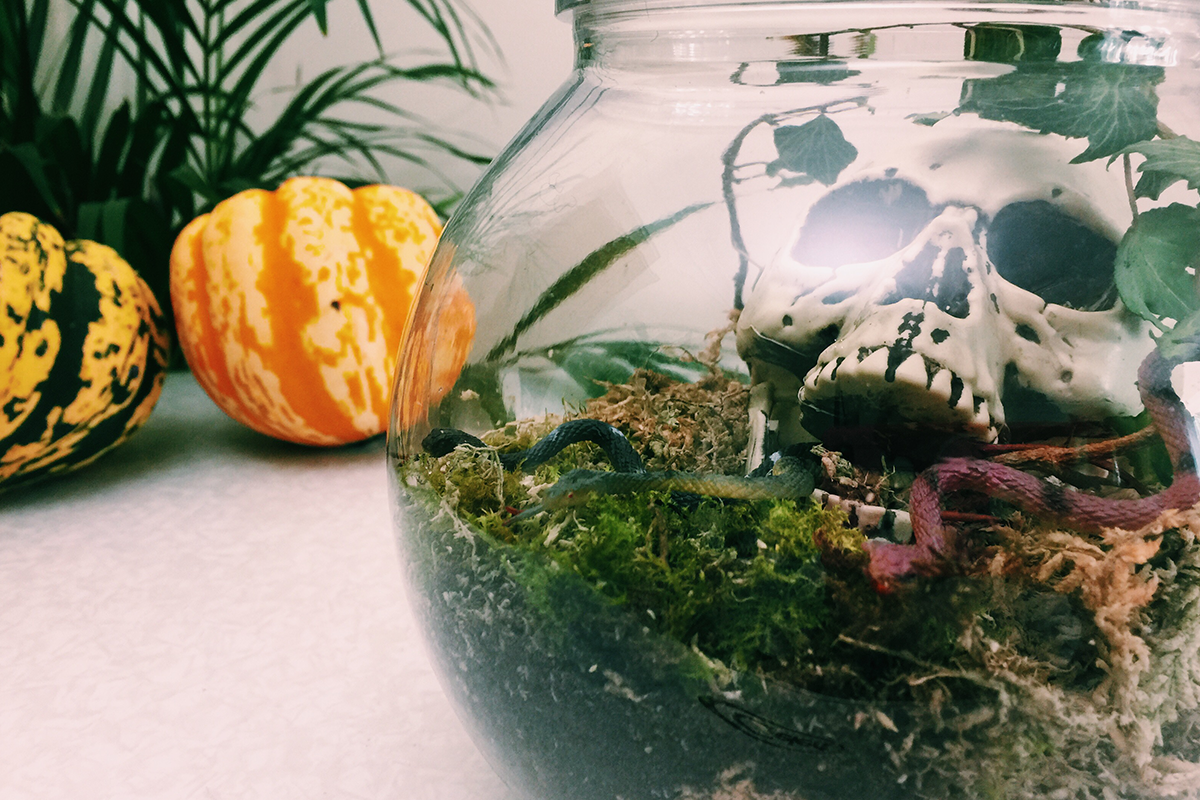 How To Make a Cemetarium

It obviously depends on the tools you already have, but here are all the things I used to make mine:
– A fish bowl (I actually purchased a plastic one from Poundland, but it might look better if it’s glass)
– Pebbles
– Soil
– Moss (I used a mixture between Sphagnales and Andreaeopsida)
– Any decorations you want! I used a small skull that I’d purchased with a bag of bones (you can see the rest of the bones on my Halloween wreath!)
– A small brush (I used a nail brush I had left over from decorating my false nails, but any tiny brush will do) 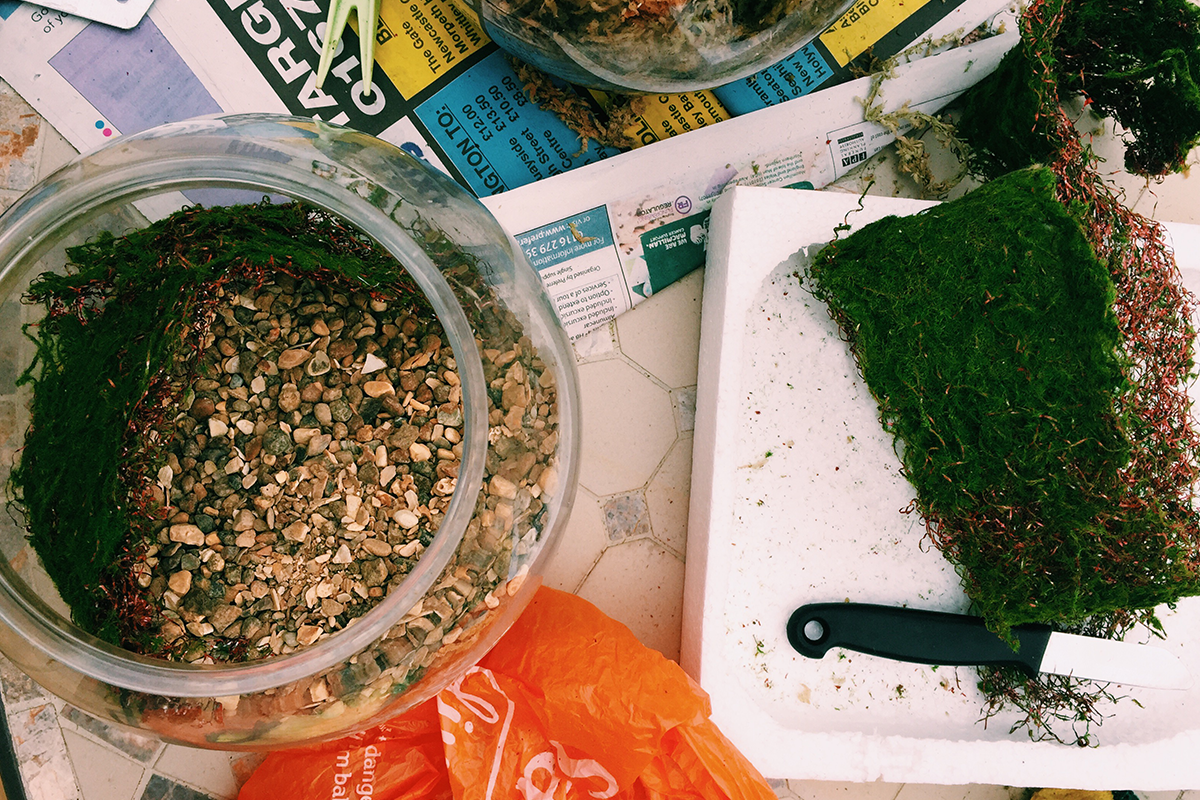 First thing’s first, you’ll need to wipe down your bowl to make sure it’s nice and clean. Next, add pebbles to the bottom of the terrarium/bowl. Not only does this weigh your cemetarium down, but it also allows for drainage- you don’t want your moss or soil to be sodden!

I haven’t added any amounts to this, as it totally depends on the size of your cemetarium, but mine was fairly small and the pebbles filled about 2-3cm in height in accordance to the bowl (does that make sense? hehe) 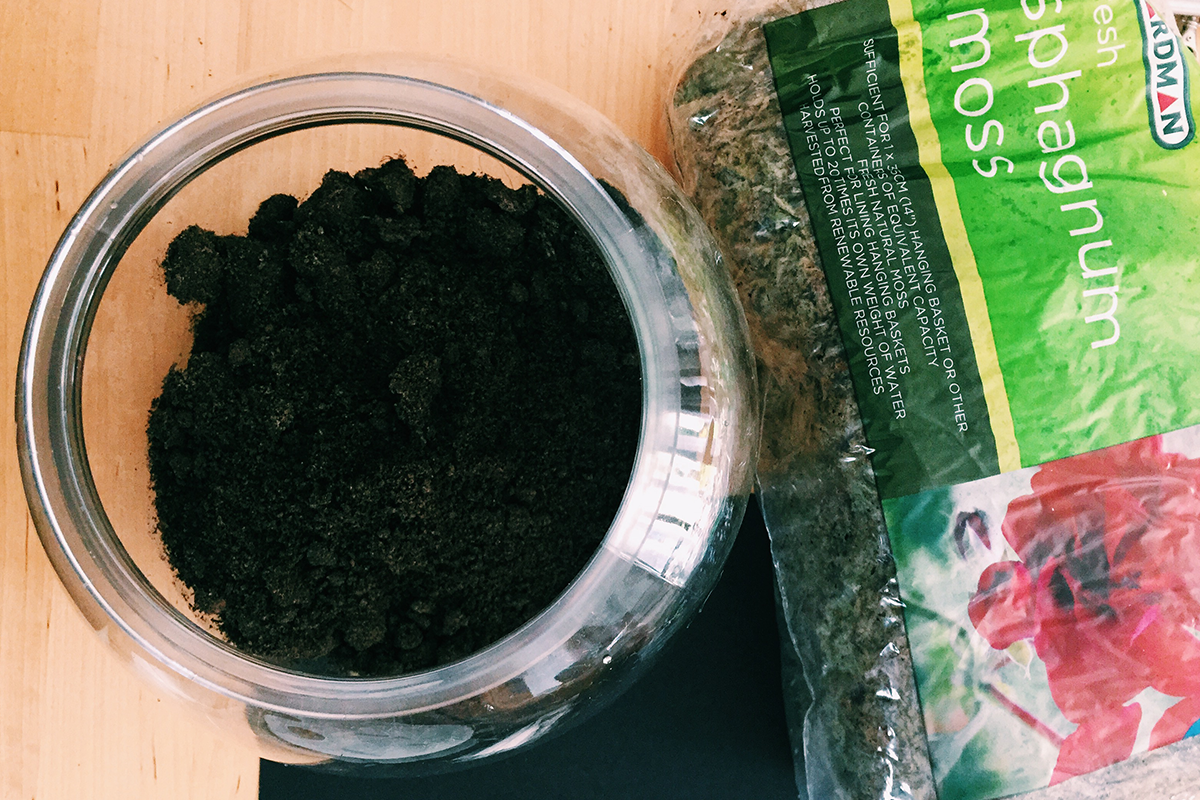 Next up, stick some soil in there! My mum’s a super keen gardener, so I was able to get some simple potting soil from her wee shed to help me out. I also got my Andreaeopsida moss from our garden, which actually already had soil attached which was handy. Back to the soil- add a generous amount, but allow space for the moss to sit, and also make sure the height is such that your decorations won’t be squished.

Now it’s time to plant your moss. Now moss is funny, and I have to warn you it must be watered a lot (the best thing to use is a mister) so make sure you’re decorations can 1. Be okay to sit on/in the moss and 2. Be okay to get wet! 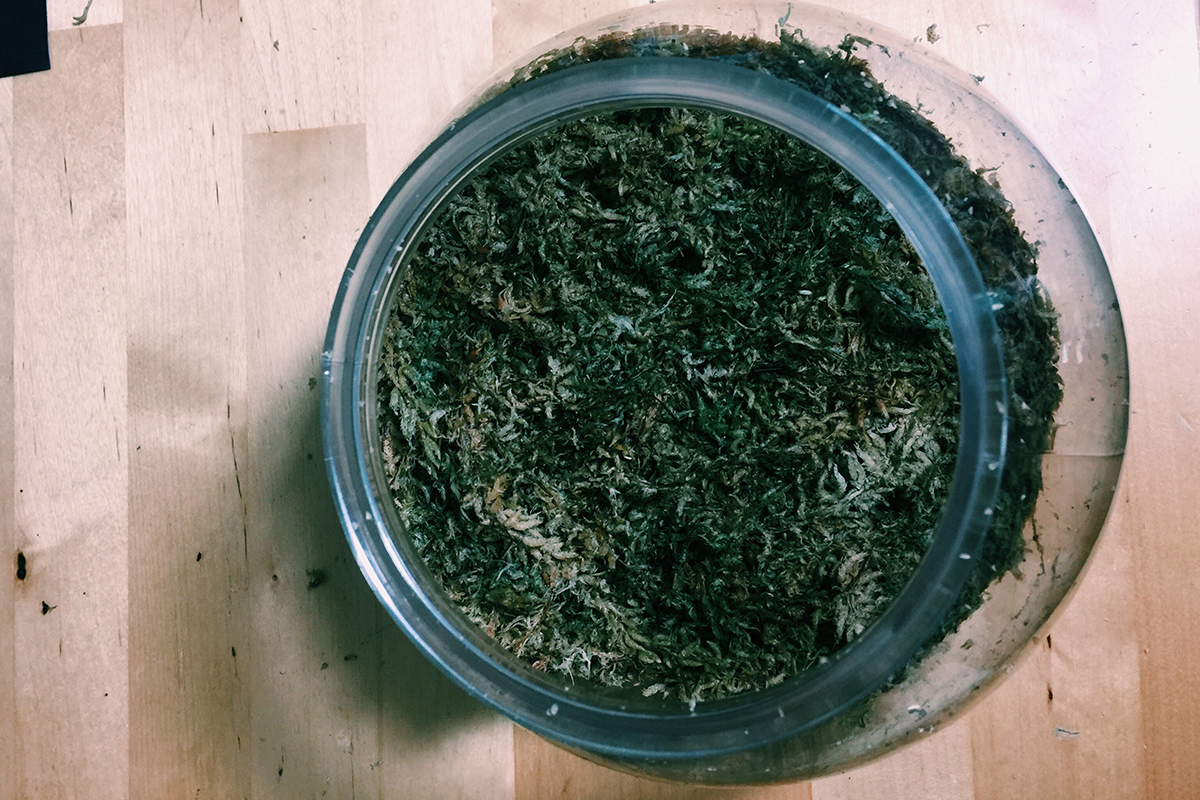 Like I said, I used two different styles of moss. Sphagnales is basically the stuff you get for hanging baskets, it’s typically found in strands and it’s stringy. I also used Andreaeopsida which is great as it looks just like a mini version of grass. I used the soil to create an uneven shape, before planting my moss, being sure to press it in to compress it, and leave a dip as a place for the skull to fit. 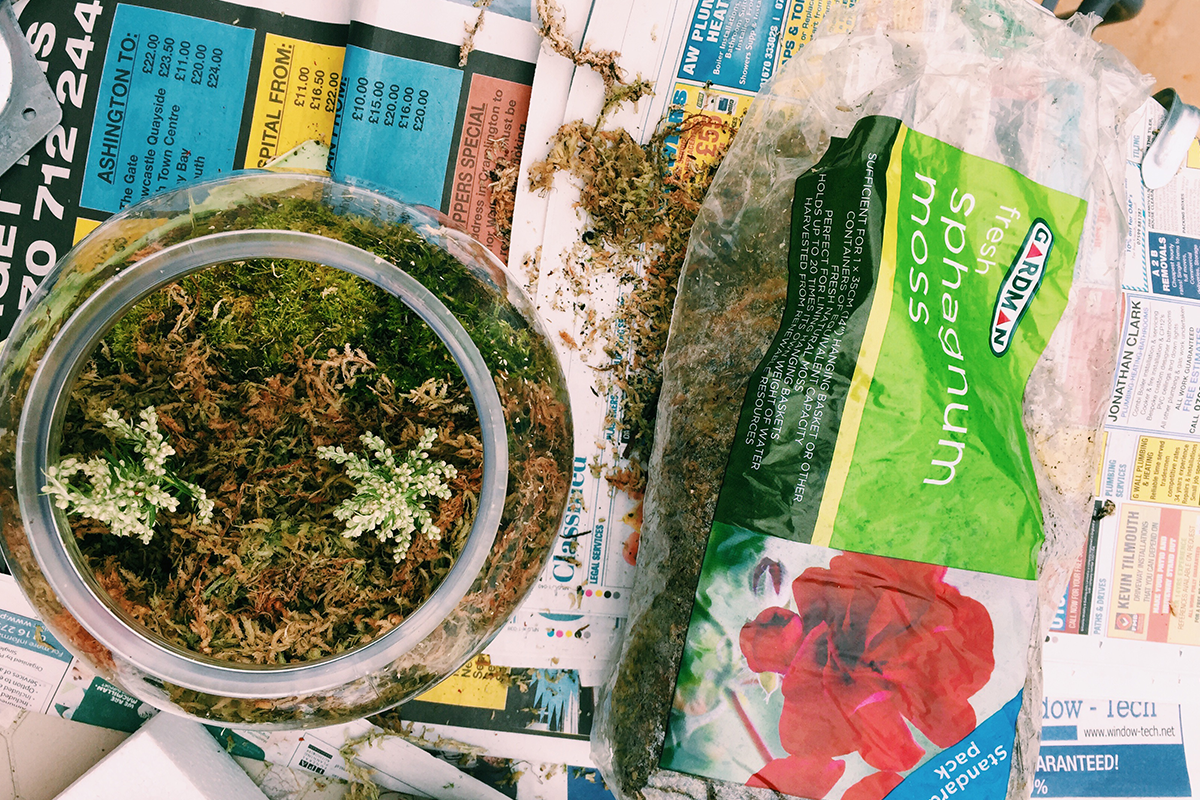 All mosses are fine, and you can even go as far as just using fake moss (pictured below) I purchased it in a roll from Dunelm in their homeware section near the fake flowers- I’m sure you can also purchase online too. 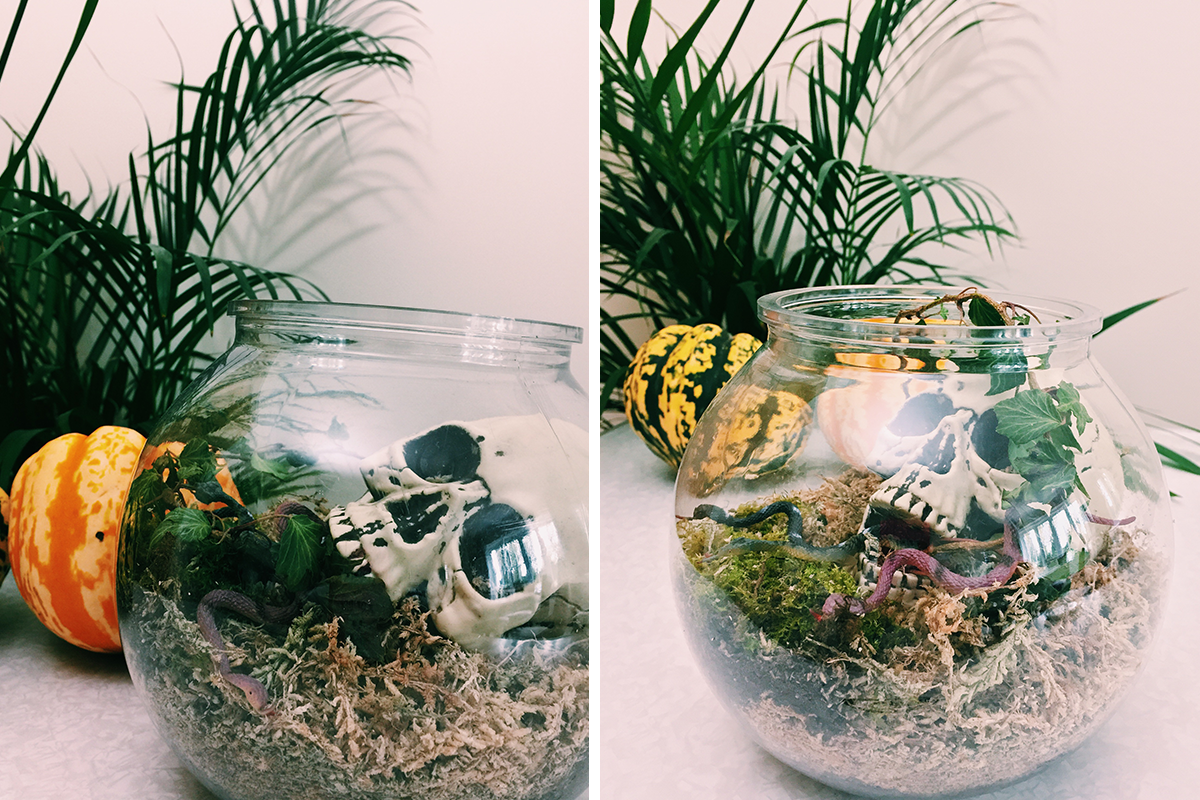 Now to the exciting bit- decorating! I’ve seen a number of people create cool cemetery-like scenes which are amazing (have a little browse on Pinterest), but with real moss and pretty much zero wood carving skills, I stuck to some shop-bought accessories! I got an amazing skull, and sat it at an angle, jaw-open, before adding in some small plastic snakes to make it extra spooky.

To maintain your moss, I found a handy guide online that really helped me out:

Let me know if you make a cemetarium! I’d love to see your designs! 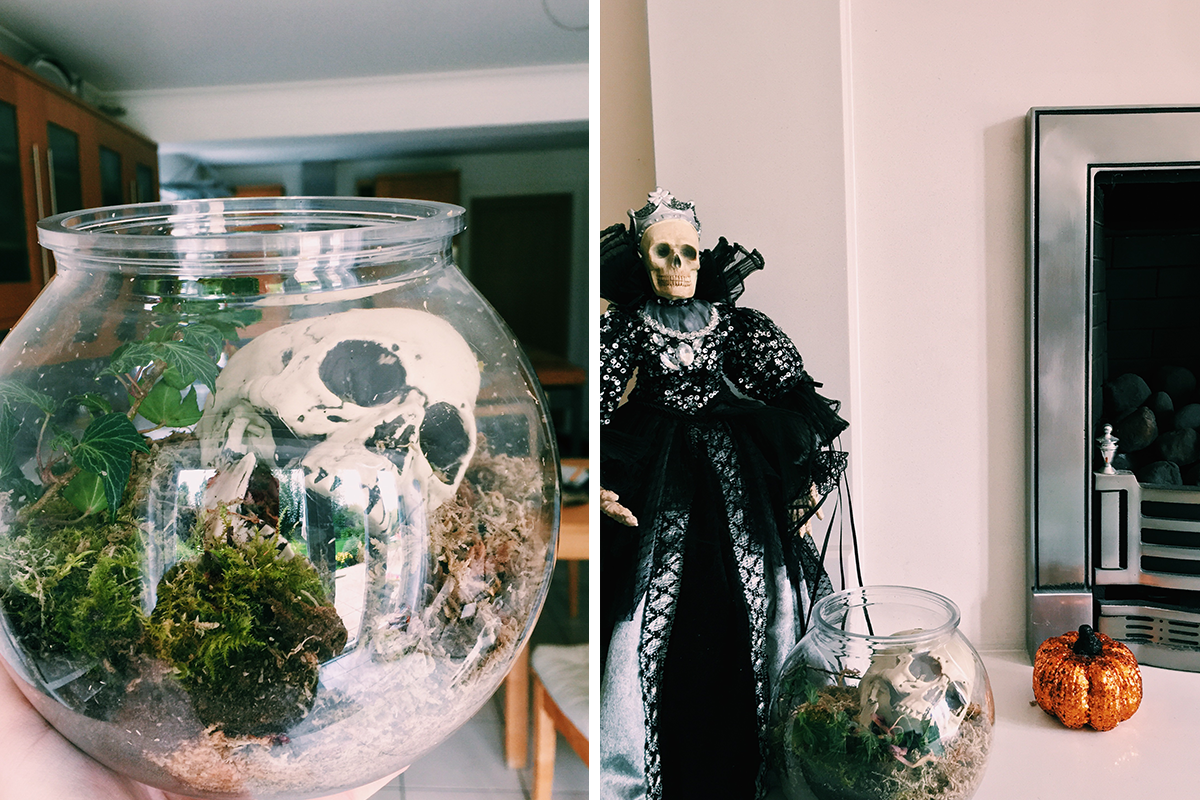