The press has today been plagued with the news that over 100 celebrities are under threat of having intimate pictures of themselves leaked on the internet. Names such as Ariana Grande, Rihanna, Selena Gomez, Lea Michele and Kaley Cuoco are amongst those on a vile list released by an unknown person said to be hacking their phones after an iCloud leak.
I sit here an irritated young lady. I was messaged tonight and asked if I wanted to see Jennifer Lawrence nude. My answer was an instantaneous prolific no, yet my thoughts on the subject lingered.
If we were to eliminate the word celebrity from the equation, how differently would people look at this situation? All of the women under threat are victims- all trusted the situation they were in, took images they believed would remain safe and the release of these images is a violation of their privacy.

So What IS The Harm in a Couple of Photos Leaked Online?
“Might boost her career”
“She’ll get over it”
“She shouldn’t have taken them in the first place”
Statements of a similar stature are heard regularly in the case of  girls becoming victims of revenge porn- Young people are now becoming sexually active at a much younger age, the pressure to look attractive and gain a sexual partner seems a necessary goal but with the growth of a digital age, these images being used deviously are on the rise.
Social media is a place to interact, but it has also become a place of taunting and bullying, where both girls and boys face abuse from peers over their looks, their sexual orientation and the release of images similar to these.
Just as porn projects a false image of sex for young people, these pictures too could have a knock-on affect as to the lengths teenage girls are willing to go to to impress the opposite sex. Actresses such as Jennifer Lawrence, praised for her normality and her charm as well as her renowned role in family film Hunger Games could now have their reputations inadvertently tarnished and more importantly, be setting a worrying example to young fans.

Women are not sexual objects and if we are to take any steps towards equality, it would be to discontinue circulating awful images such as these. Before you decide to take a look at these images out of interest, think how you would feel if it was YOU.

Several celebrities have reacted to the situation in support: 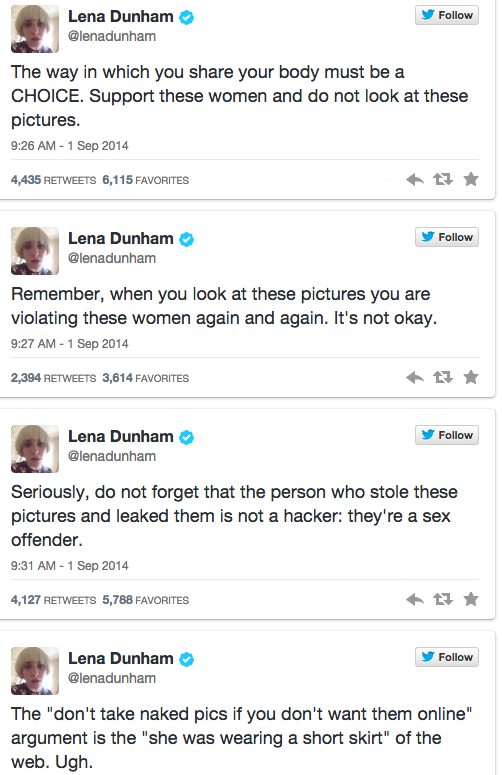