I don’t think it’s far-fetched to say one of the main reasons I wanted to visit New York was for the food. It’s delectable gastronomy has earned it a renowned name, and from crazy cake shakes to piled-high pancakes and everything in between, I couldn’t wait to discover the city’s culinary culture.

For Breakfast.. Clinton St Baking Company
Situated in Essex on the Lower East Side, Clinton St Bakery is a renowned establishment, and is known for their delectable brunch menu that draws in the crowds. Kayle and I took the subway on our first morning in the city, greeted in Essex by a flurry of snow and boy were we glad the queues we’d heard of were non-existent – the cafe was a welcome break from the cold!

The place didn’t have as much charm as I would have liked from a simple diner-esque restaurant, but we were on a mission to find fried chicken waffles, and my god did we. Served on a hot plate with a pot of sweet, oozing maple syrup on the side, I had to admit this was the first time I’d ever eaten chicken this early in the morning (8am!), but it was GOOD. We’d already been warned that NYC prices weren’t the cheapest, so a $17 breakfast didn’t seem to break the bank too much. 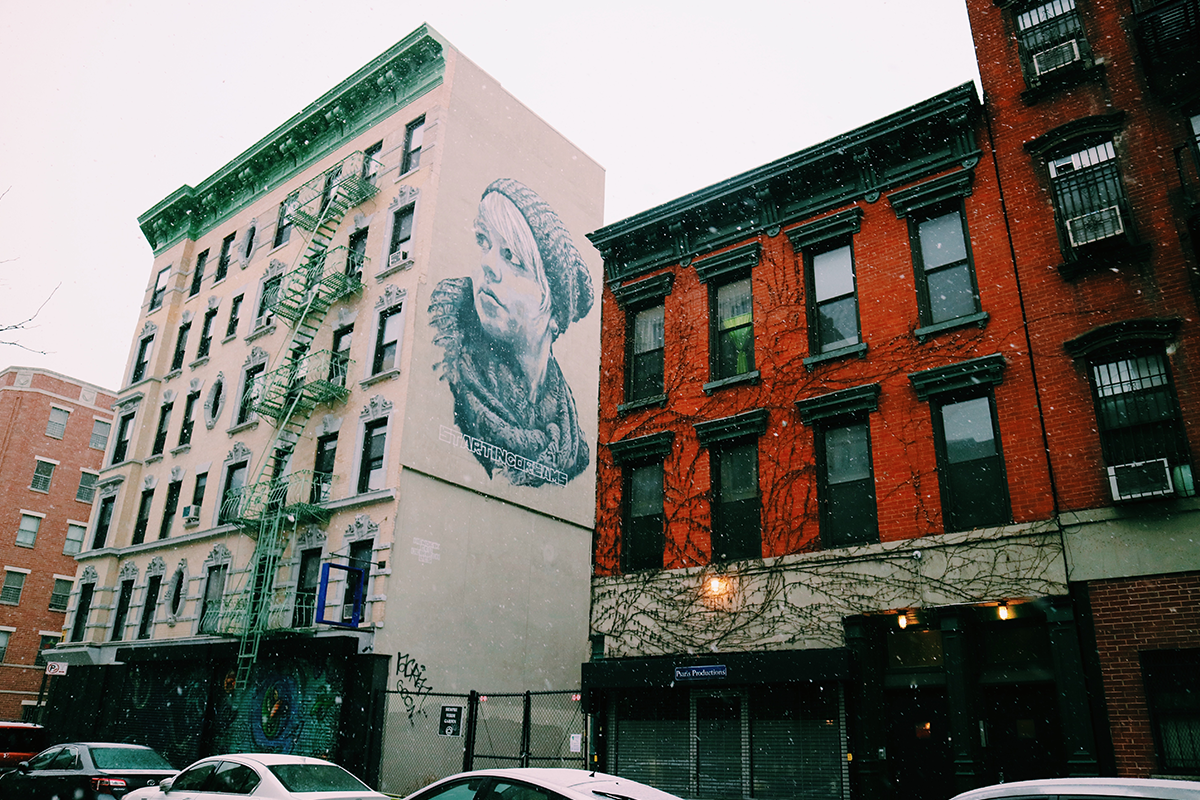 For Breakfast… George’s
On our last morning, we’d been craving pancakes and managed to find a local diner not far from our hotel in the Financial District. I was initially a little apprehensive because I’d researched every other place we’d been (I’m always scared of disappointment so I plan ahead!) but I was really impressed with the food and the portion sizes at Georges. 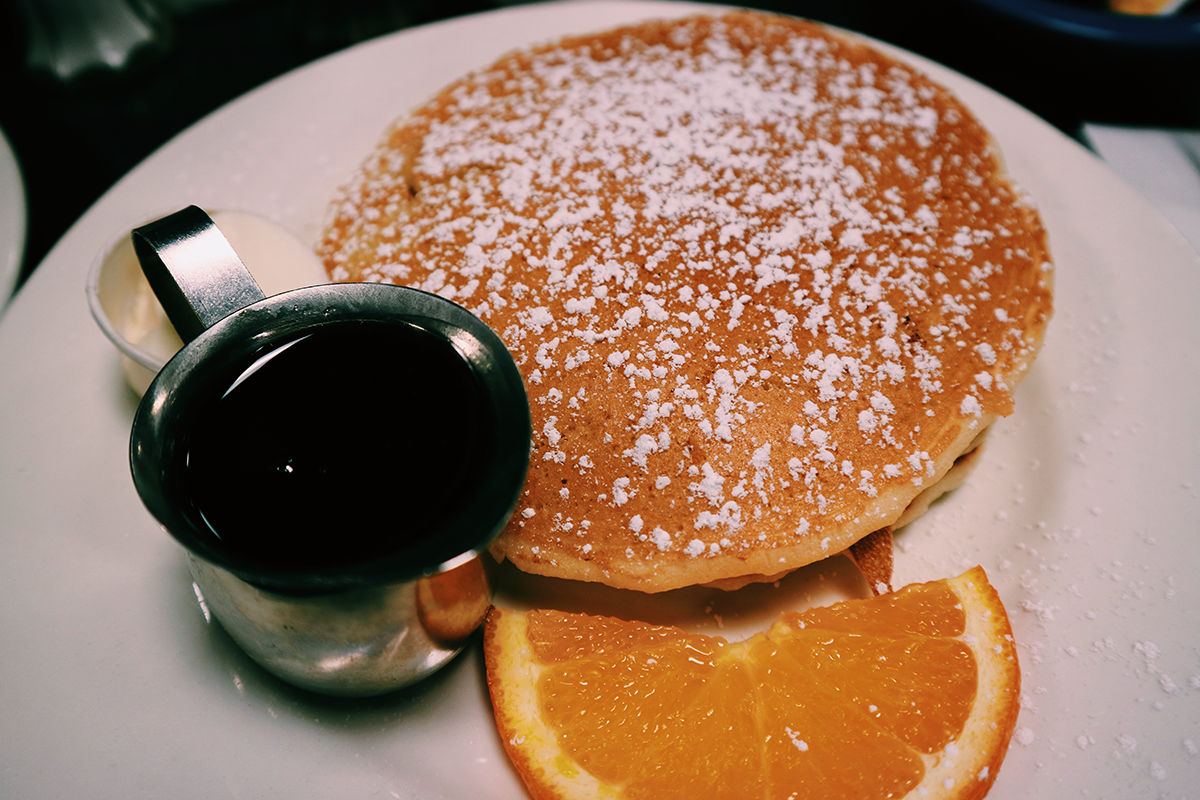 As soon as we were seated in the diner, there was a real feeling of the true New York. That wonderful NYC twang filled the air as the small tv in the corner of the restaurant murmured the local news. We chose the pancakes with egg and bacon, which were delivered super quick, much to our delight. They were served separately, with the classic, fluffy American pancakes being accompanied with a slice of fresh orange and a mini jug of maple syrup on one plate, our breakfast bits on the other. 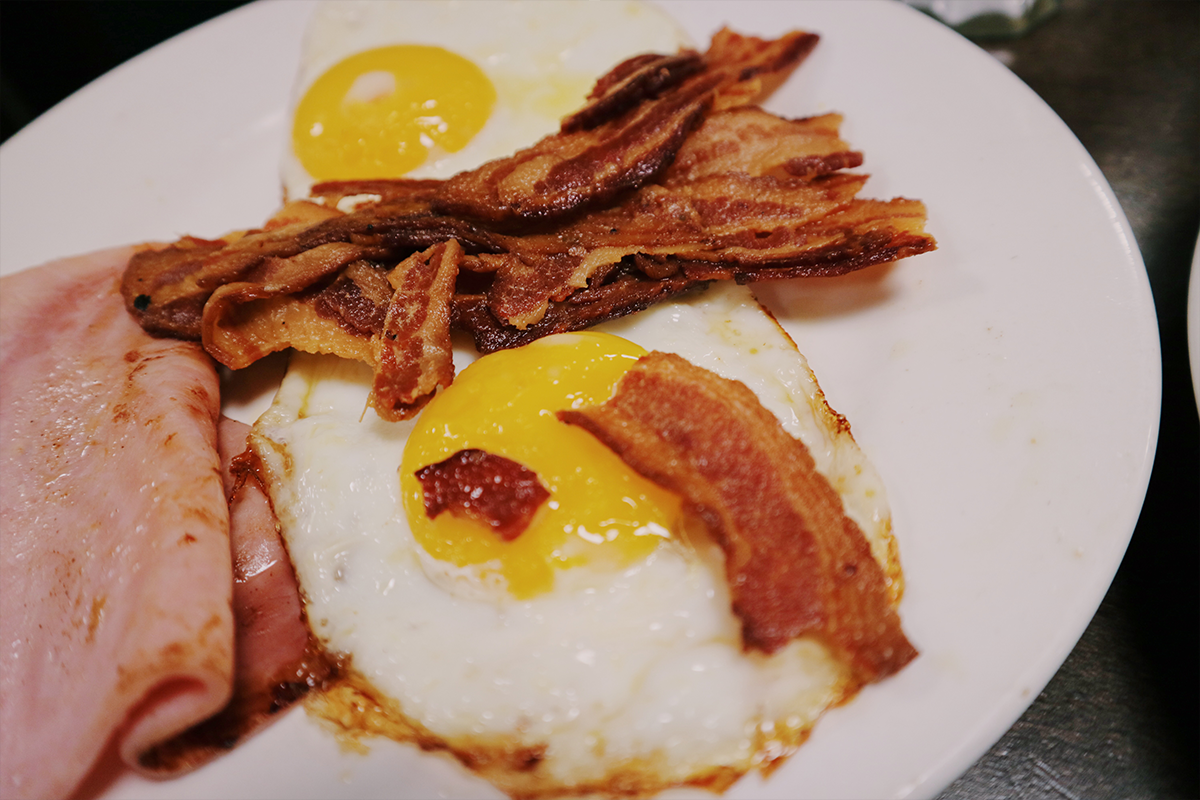 At around the $12-15 mark, it was pretty reasonable for the portion size and I would definitely recommend going for a more authentic experience.

For Sweet Treats… Black Tap
I discovered Black Tap on Instagram a few weeks before heading to NYC and with there being three in the city alone, I knew a trip was in order. Top of the list was a crazy shake, something I’d seen pictured a lot, but never actually tried. 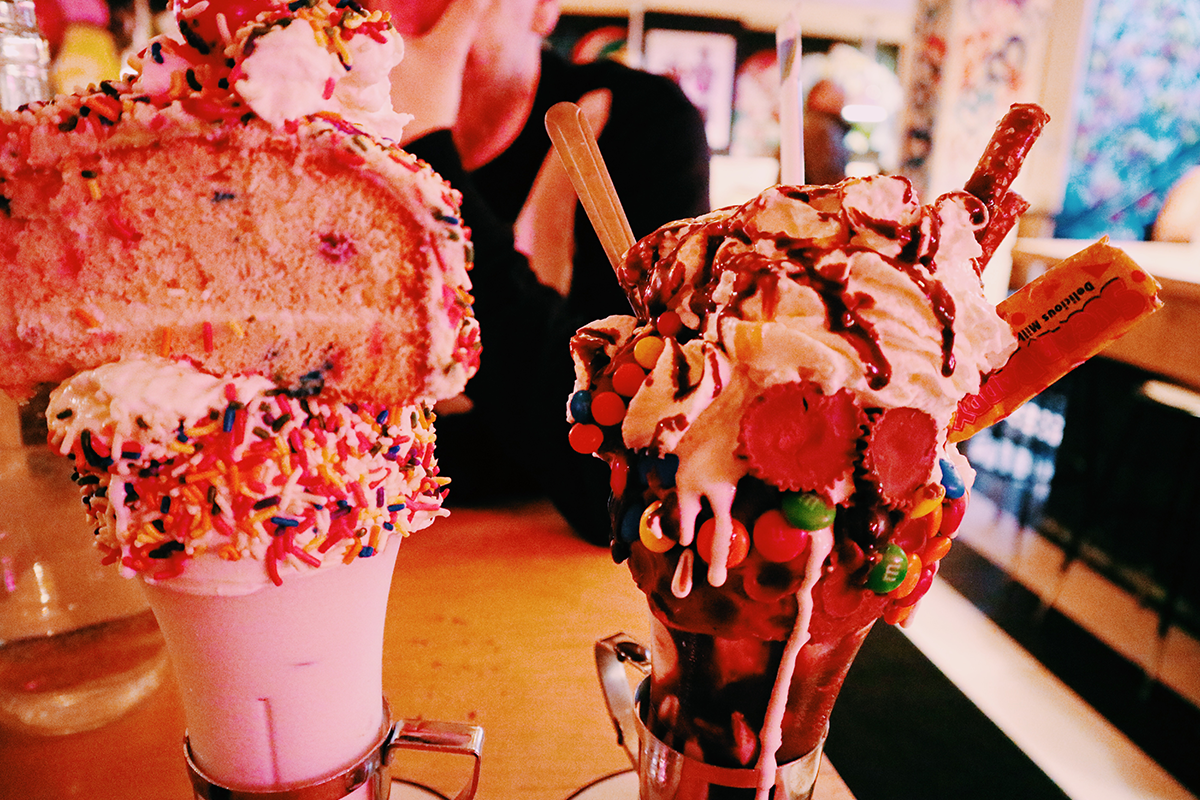 Taking freakshakes to a whole new level, these sickeningly sweet drinkable meals were a feast for the eyes and the mouth. While I tucked into my sweet and salty variety (think peanut butter shake with pretzel rods, Reeses pieces and whipped cream, rimmed with M&Ms and other heavenly chocolate pieces), Kayle tackled his cake shake; a creation like no other. A batter flavoured drink topped with whipped cream and a SLICE OF CAKE, covered in hundreds of thousands awaited. 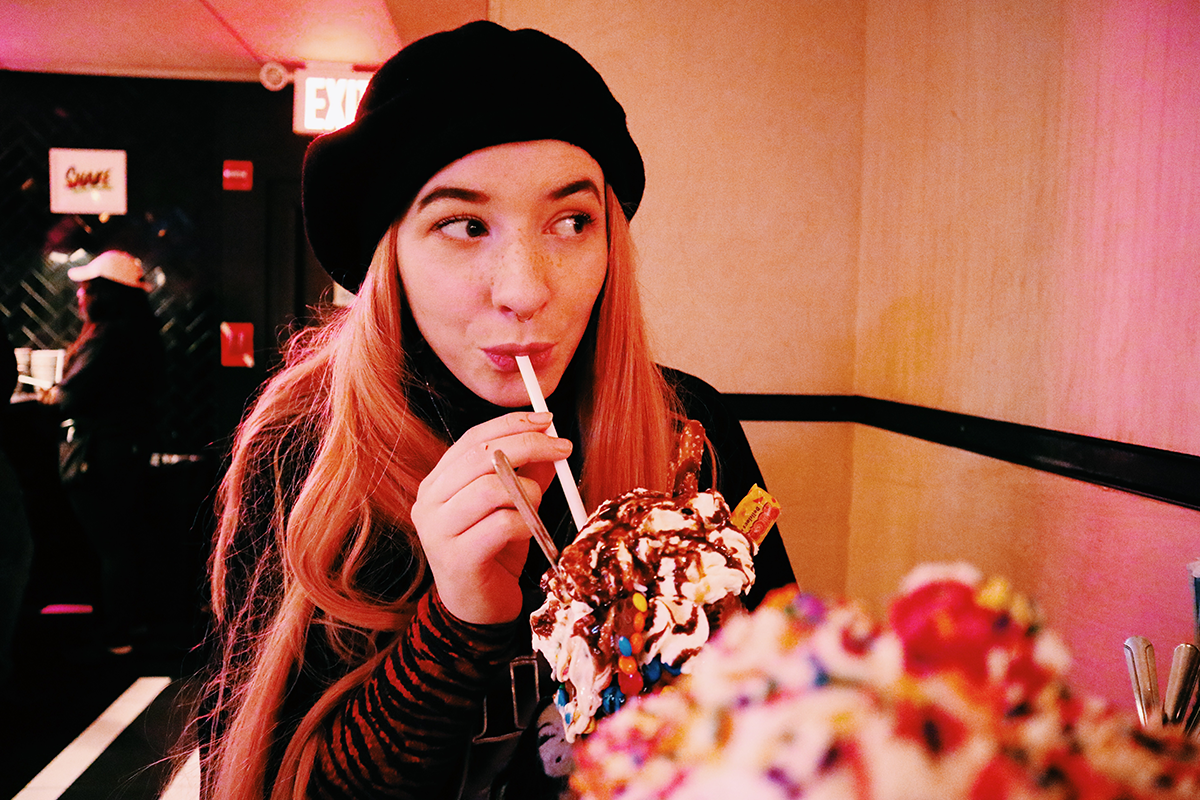 It’s safe to say, neither of us finished it and we were a little too far from our hotel to take a cup-to-go with us… but for $15, it was worth it.

For Sweet Treats… Red Mango
Kayle had been craving a smoothie and we came across Red Mango on our first night after walking from the station to our hotel. After too much temptation, I decided to grab a selection of their frozen yoghurt and boy was I in love! I ended up combining blueberry, Nutella, oreo and peanut butter frozen yoghurt with Reeses pieces and lychee-flavoured tapioca balls. 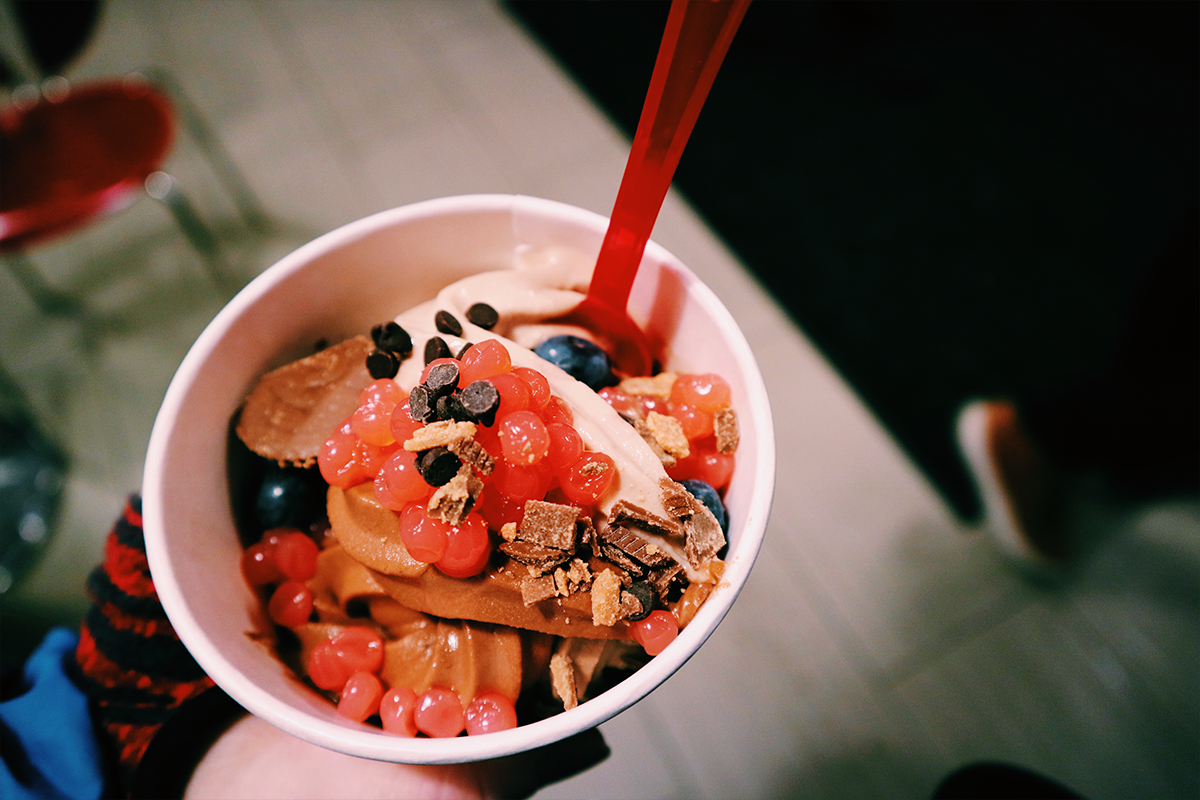 For Coffee… Sweet Moment
Chinatown has the most amazing selection of places to eat, there are countless bubble tea joints, places for a quick bite and sit-down dinners to die for. My highlight though? Sweet Moment cafe. 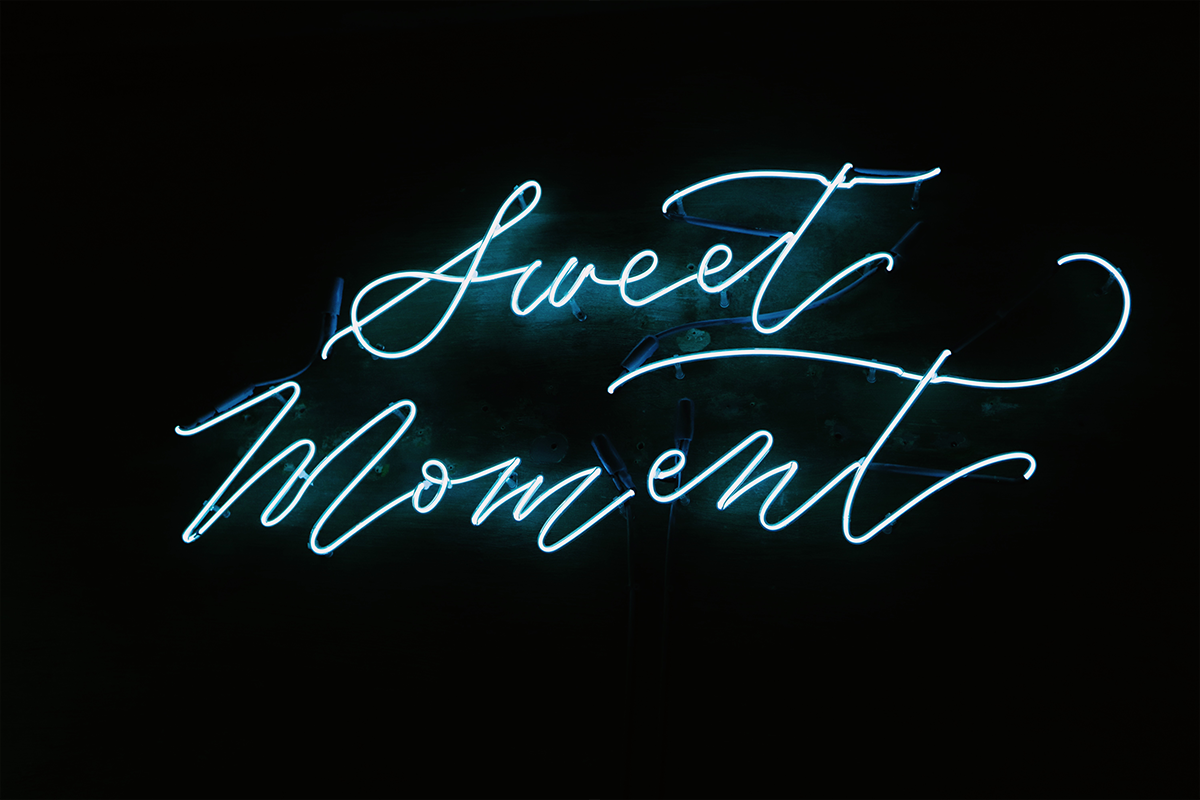 An Instagrammer’s dream, this quaint shop served cold milk tea complete with tiny, yet irresistibly cute faces. I opted for a red velvet variety, while Kayle chose matcha, and after copious coos, and several pictures, we enjoyed our drinks with a mochi or two. I mean, $5 for the cutest cup you’ve ever had? Why not. 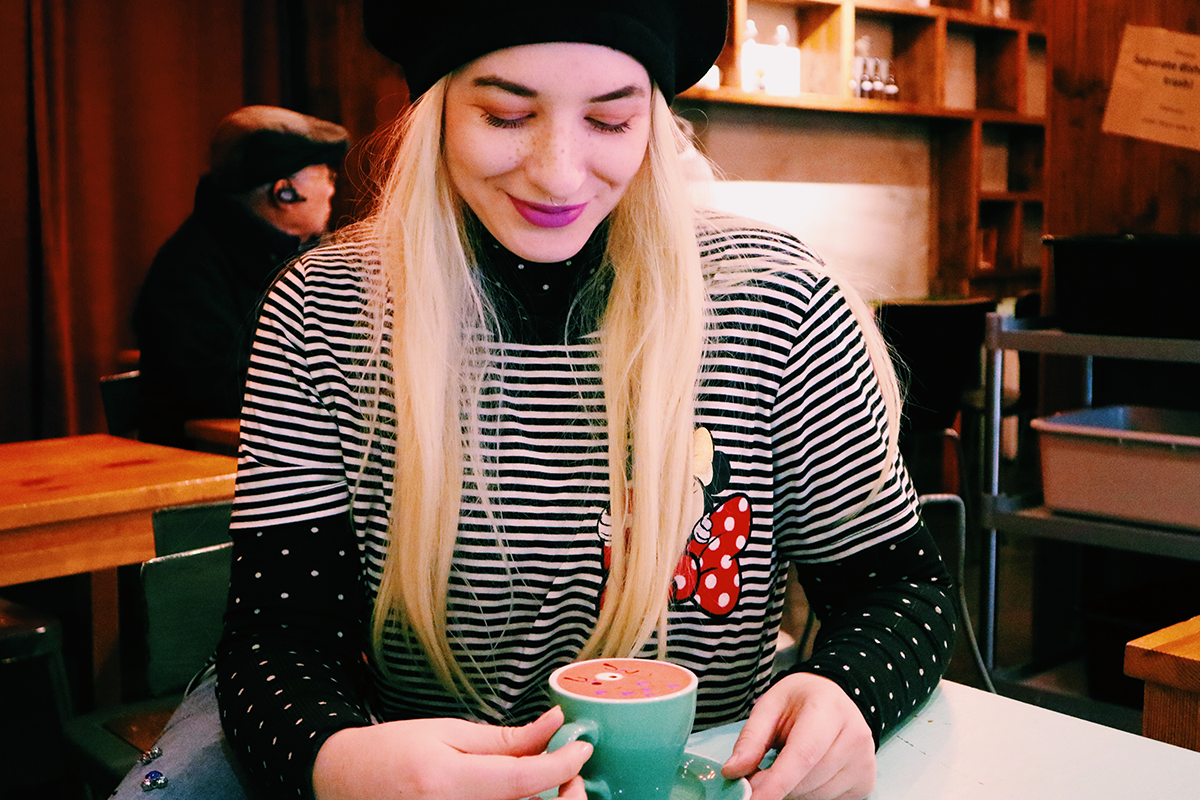 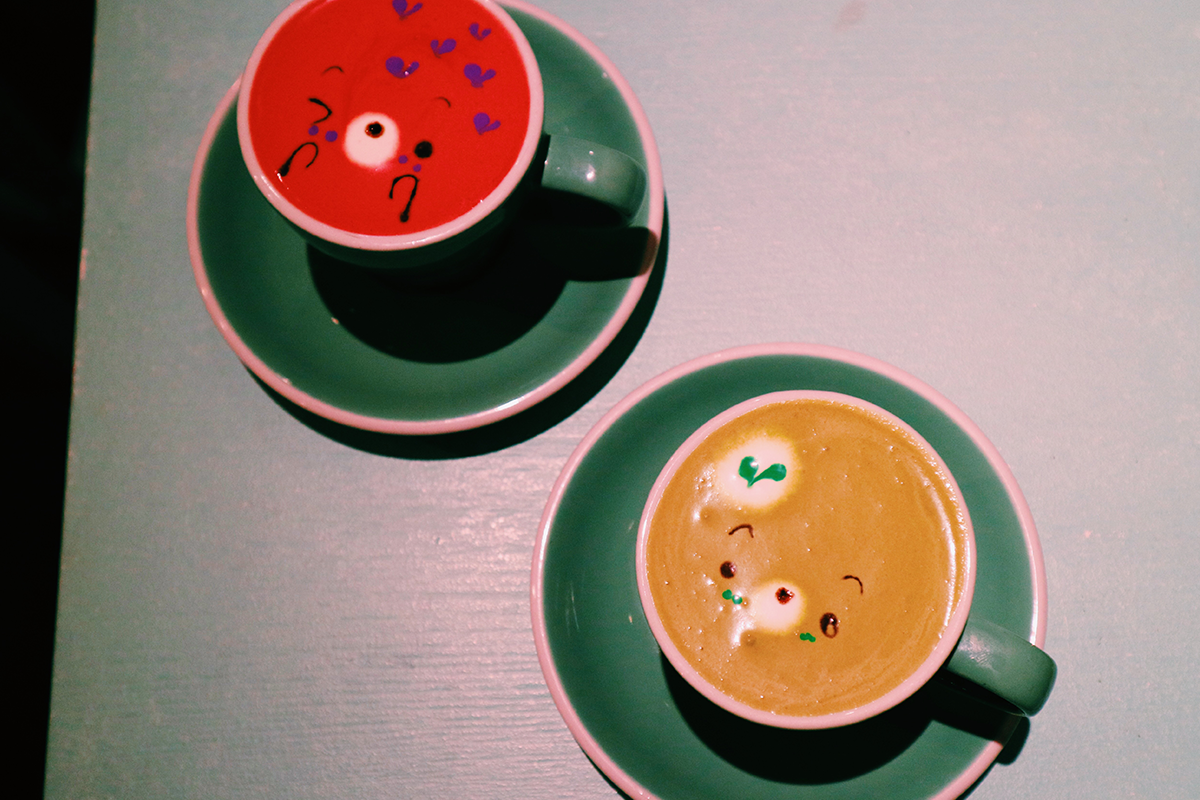 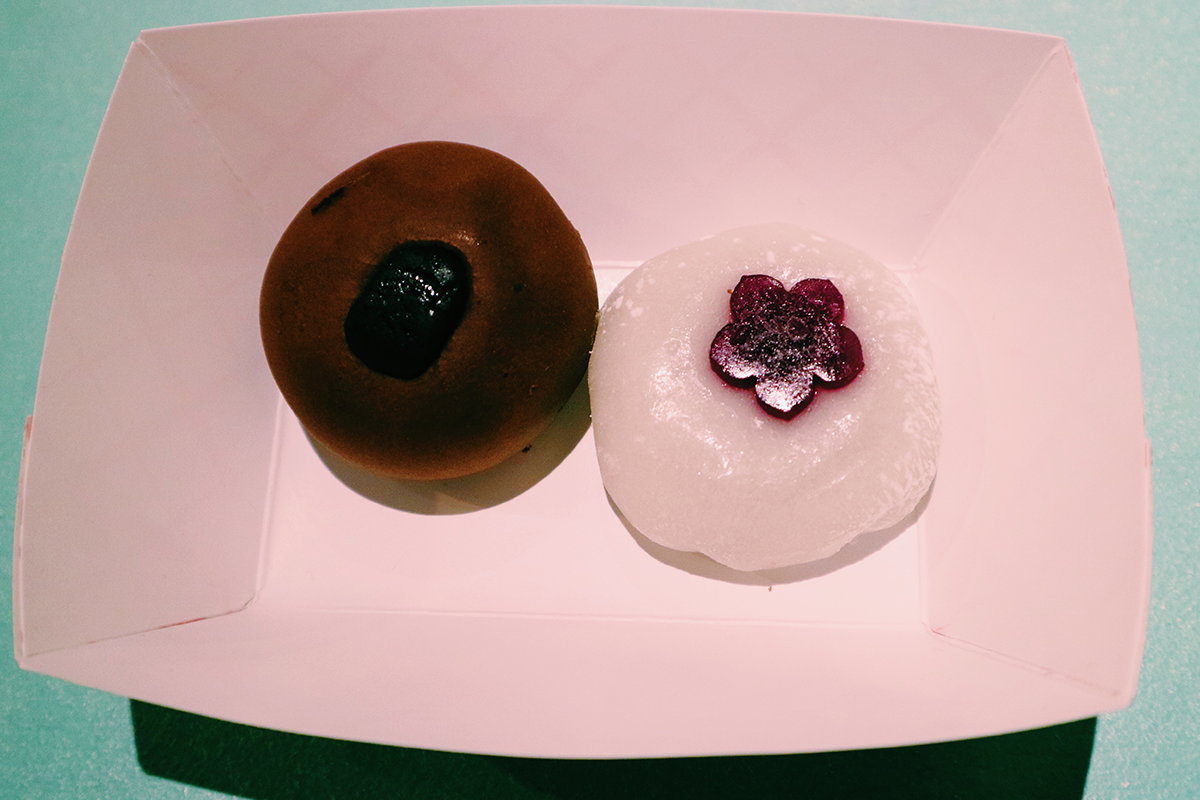 For a Quick Bite… Shake Shack
By now I’m pretty sure there isn’t a single soul who doesn’t know about Shake Shack… but I’d never tried it! On our first day in the Financial District we were eager to explore so were looking for something quick and easy- Shake Shack didn’t disappoint. A peanut butter milkshake with a chicken burger- perfecto. 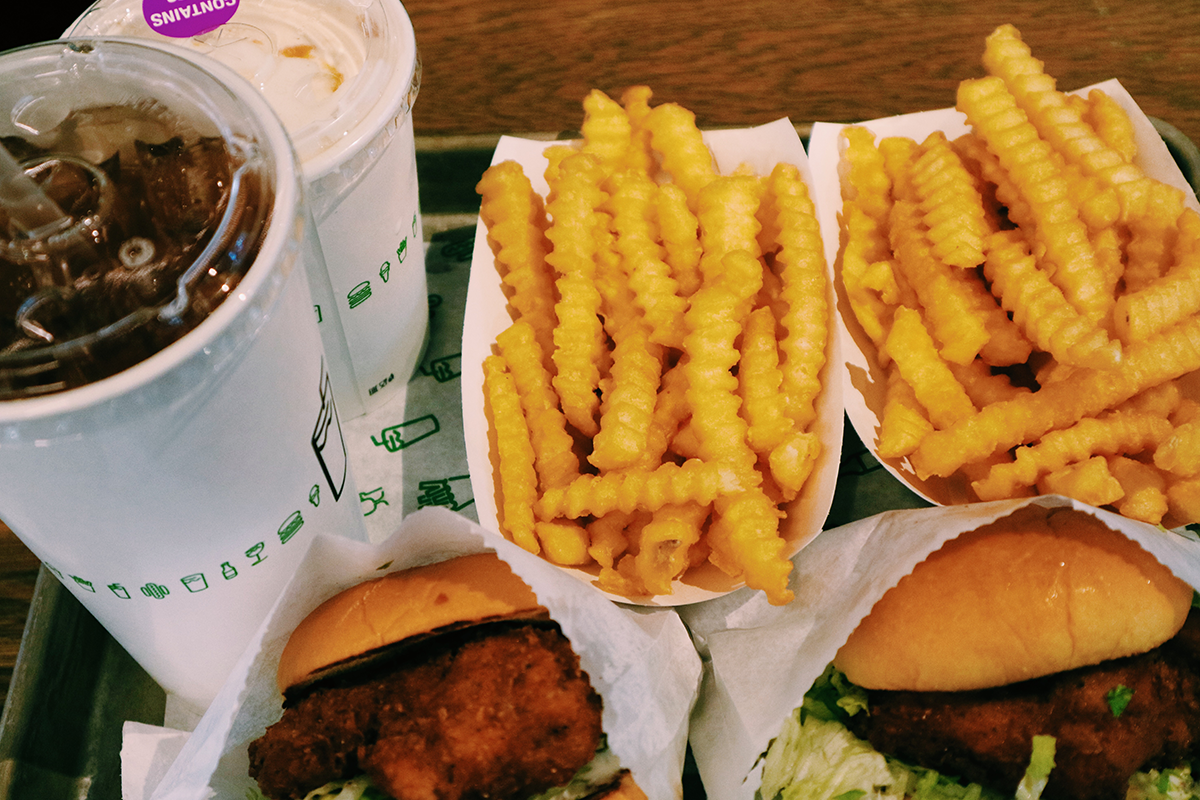 For Dinner… Asian Fusion
I’m ashamed to say, I didn’t eat TOO much American food in NY, I was so surprised at the variety of Asian cuisine that we ended up eating both our dinner-time meals at Asian places. The first was Poketeria in Korea Town, right near Grand Central Station – after a day walking, we’d checked out nearby Times Square and the Rockefeller Center so wanted to get something simple, yet delicious. Build-your-own poke bowls awaited, and we had the super quiet eatery almost to ourselves – the guy who served us was also super nice, recommending different combinations so we got the most out of our dish. 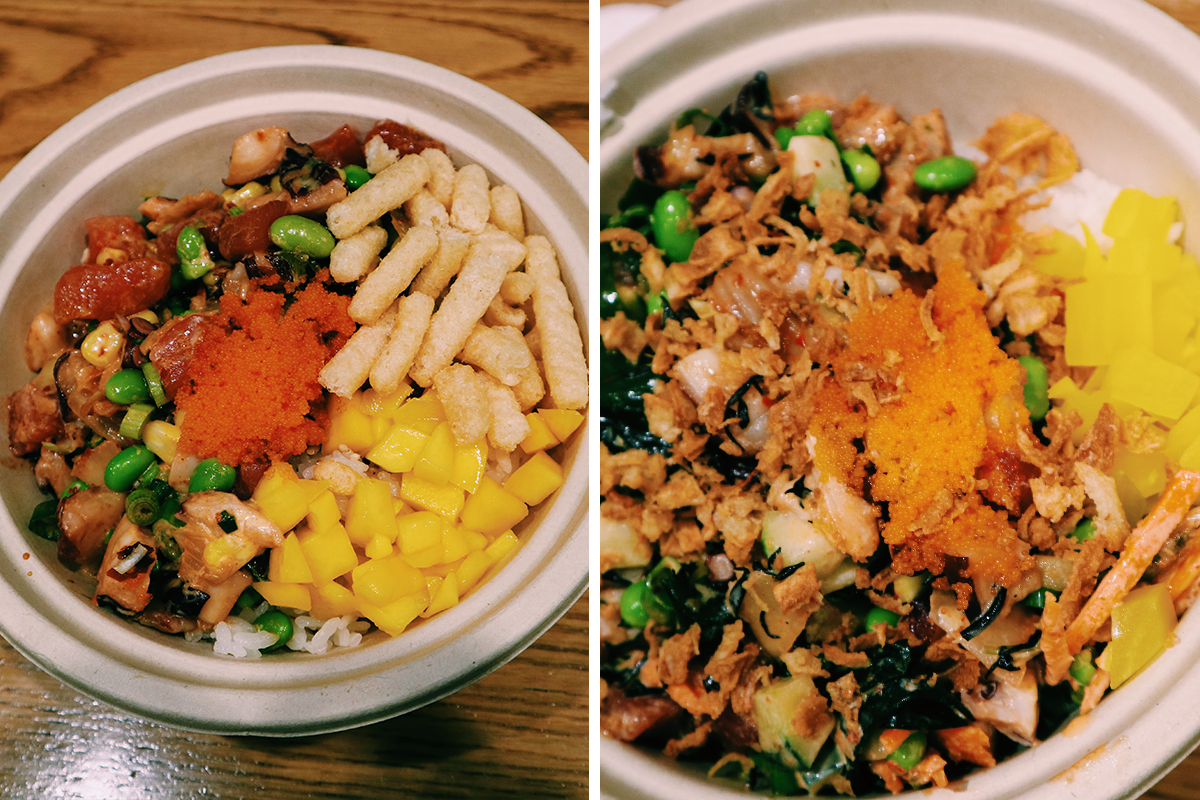 On our last night, we headed out to dinner with my friend Dana, at a place local to our hotel called Menya Jiro. Again we’d simply found this after walking past one night, and knew we had to visit! We both got a simple pork ramen dish, which was delivered to our trays almost instantly, and with a relaxed environment, we were able to sit, enjoy our ramen and chat the night away.