For a family that is famous for being famous, the Kardashians have a poor reputation for saying anything remotely intelligent. So how does their education really measure up?
As the rulers of reality, their rocky relationships and constant stream of endorsements have been a source of entertainment for millions, but with a notoriety for silly statements, it may come as a surprise to you that some members of the family do in fact have some pearls of wisdom to share…
10. Kendall Jenner’s Knowledge of Money
The young, but often precocious Kendall Jenner showed us her sassy attitude during season two when she proclaimed to her mother that money does grow on trees, it’s made of paper. She is indeed very correct, as dollar bills are manufactured by the Crane Paper Company. The paper used for currency is unlike normal wood pulp paper however, consisting of 75% cotton and 25% linen. I’m sure Kendall knew that too… 9. Kim Kardashian’s Wise Words on Inner Beauty
33 year-old Kim Kardashian has had a fair bit of bad press about her abnormally large gluteus maximus amongst other parts of her body, so it’s refreshing to hear that she has some words of encouragement for anyone feeling ever so slightly down about their appearance:
“Beauty is the best possible version of yourself on the inside and out.”
True beauty is Kim’s ridiculous cry face.

8. Khloé Kardashian’s Hatred of Pretenders
Having slightly mellowed after her marriage to Lamar Odom back in 2009, any fan of Keeping Up With The Kardashians will have missed her attitude-filled days. She had some star advice for anyone who thinks they are intelligent:
“It’s okay to be smart but please don’t pretend to be smart, it’s f*cking annoying.”
I feel you girl. Kind of like how Kanye West thinks he’s God?
7. Kim Kardashian On Having No Regrets
With a sex tape, multiple risqué photo shoots, marriages that went wrong and wardrobe malfunctions, Kim Kardashian is definitely a woman whose made a few blunders in life. Her bad press didn’t get her down however as she said:
“I’ve made mistakes, but I don’t have any regrets. I’m the kind of person who takes responsibility for it and deals with it. I learn from everything I do… get to know me and see who I am.”
Impressive words Kim, but I’m not sure we will ever get over that sofa dress…

6. Khloé Kardashian on Kim’s Vanity
Everyone knows Kim Kardashian is Queen of selfies and her own biggest fan, so what is funnier than us ripping her apart? Her own sister doing the same!
Khloé said:
“You know why she’s the most googled person? Because she was googling herself.”
I wonder if I will become famous by doing just that? *runs to Google*
5. Kim Kardashian on Weight Loss
After having a baby last year and being bombarded with particularly vicious comments about her weight gain, the newly wed hit back at haters by losing weight, yet retaining her infamous curves. Being careful not to appear too unhealthy, the star claimed.
“For me, skinny is just a style of jeans – not a goal.”
Smart girl, who clearly knows her jean-type.

4. Kris Jenner On People Who Disagree With Her
Momager Kris Jenner, for all her plastic surgery and whimpering moments, is a pretty strong and smart woman. When talking about not getting her own way, she exclaimed:
“If somebody says no, you’re asking the wrong person.”
It’s true to say that if it weren’t for Jenner, a constant promoter of her children, the Kardashians as a brand would be non-existent, save for their father being embroiled in the controversial OJ Simpson trial, of course. The admirable quote could be seen as a modern day version of William Edward Hickson’s “If at first you don’t succeed, try, try again.”

3. Bruce Jenner on Parenting
The meek and ever-empathetic Bruce Jenner is seen as an innocent in the Keeping Up with the Kardashians series, often dominated by his strong and fierce female family members. As a father of six and step-father to three, he said:
“If you’re asking your kids to exercise, then you better do it too. Practice what you preach.”
Now a motivational speaker, the 64-year-old is an inspiration to many as he tours the country giving talks to stimulate thousands of people into living their dream – admirable. 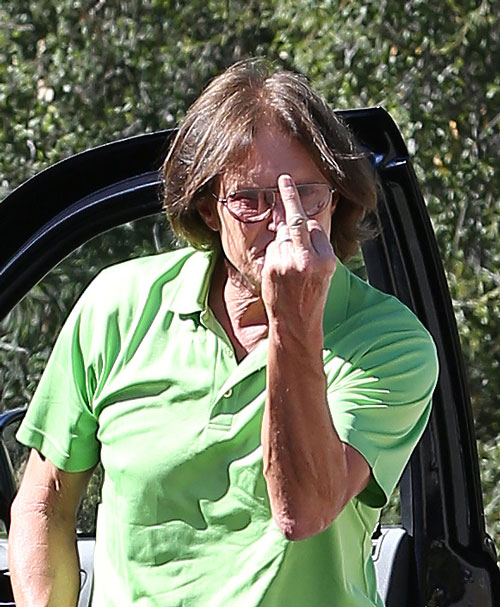 2. Kim Kardashian’s Teetotal Life
For all the claims that Kim Kardashian is a bad influence, at least she isn’t falling around drunk, right? She credited her large family as the reason for her sobriety, saying:
“I’ve never been a drinker, I’ve never gotten into drugs… You know, I think I have such a close family… I think you know my sisters do enough drinking to kind of fill up the whole family.”
With strong support from a family unit, it seems the Kardashian has led a pretty substance-free life. I’m sure she endorsed watermelon-flavoured alcoholic drink Midori though?

1. Khloé Kardashian On Shark Attacks
Ladies, Khloé Kardashian has some wise words when it comes to taking a dip in the sea..
“Don’t go into the ocean while on your period because a shark is going to attack you.”
Okay… so this statement has never been proven, but it’s definitely funny. Thanks for the heads up Khloé!